The Altar of Saintess is a dungeon located in the Western Steppes. Players can enter this dungeon by talking to Recruit Officer Taylor in Polydeux (536, 707). Players can also teleport to the entrance of the dungeon via the Illusion Stone in Archosaur for a fee of 20,000 silver coins. It is available to players who have reawakened twice, are level 105, have a Boundary level of Royal Sky I, and have reached Celestial Saint cultivation.

To enter the dungeon, players will need a Secret Key of Blood, which can be acquired once per day from Recruit Officer Taylor in Polydeux (536, 707). The key lasts for 24 hours and will expire if not used. It is shared with the Battle of Survival event; you can only choose to do Battle or Survival or the Altar of Saintess in a single day. The key is consumed when you teleport inside the dungeon.

The map shares the same layout as the retired dungeon Hidden Dragon Den.

Once players have picked up their daily quest, they can take the quest "Enter Altar of Saintess" from Teleporter Kalvia to be teleported to the main part of the dungeon.

If players die in the Altar of Saintess entrance (where Teleporter Kalvia is) instead of in the main dungeon, they should not return to the nearest town or they will be teleported out of the dungeon. For this reason, it is recommended to have Resurrection Scrolls in your inventory.

10 squad members are required to complete the dungeon, although you can activate the dungeon with less than 10 players.

The following classes are ideal for the Altar of Saintess, though not all are essential:

The first part of the dungeon involves having a certain number of players gathering at the top of certain elemental chains. The squad will have 90 seconds to complete this task. If the squad fails, the squad leader can restart the challenge.

There are four different elemental chains: Fire (northwest corner), Thunder (northeast corner), Wind (southeast corner), and Ice (southwest corner). Players can open the map by pressing the M key to see the locations of each elemental chain. When the squad leader activates the challenge, multiple messages will appear in the chat box. Each message will show how many players need to be at the top of each elemental chain. For example, it may say that the Ice chain needs 2 people, the Fire chain needs 4 people, the Thunder chain needs 3 people, and the Wind chain needs 1 person. The number of players required for each elemental chain are different with each attempt of the challenge, and can sometimes require no players on certain chains. Players can keep track of how many people are at the top of each chain by checking a quest in their quest log or quest tracker called "Real-time Pops display".

A common strategy to use is to assign squad members with a number between 1 and 10. An easy way to do this is by opening the Squad window with the T key and checking the list of players on the right side of the window. Assign the players numbers from top to bottom. Other squad members can also open their squad windows to find what number they have been assigned. Once the challenge starts and the numbers appear in the chat box, players can use some basic math to figure out where they need to go. For example, your assigned number is 6. The Ice chain needs 3 people, the Fire chain needs 1 person, the Thunder chain needs 6 people, and the Wind chain needs 0 people. 3+1=4, which does not include your assigned number (6), so you do not need to go up the Ice or Fire chains. 3+1+6=10, which does include your assigned number which means you need to go up the Thunder chain.

When the challenge begins, players will need to climb their way up a certain elemental chain until they reach the top, and stand close to the mob that is at the top of the chain. Players will need to climb carefully up the chains as it is possible to fall and die in the lava below. It is recommended to take your time climbing up and to avoid using speed skills such as Holy Path as it will make you prone to rubberbanding. If you do die, it is possible to revive and teleport back into the main dungeon area and climb up the chain again before the 90 seconds is up.

Players will need to stay at the top of the chain until the 90 seconds is up. Once the timer is done, messages will appear in chat to indicate whether a certain element failed or succeeded. If all elements succeed, then a message will appear on-screen saying "Success!" and all players will be teleported to the center of the dungeon.

After completing the first part of the dungeon, Saintess Anlu will appear in the middle of the dungeon trapped in vines. Whatever target gets hit first by any player will activate its corresponding mode. Players should not attack anything yet until it is established which mode the squad intends to do.

The squad leader can find the correct target by using the Tab ↹ key and have other players assist attack them so that they are also targeting the correct target. It is not advisable to use an AoE as your first attack. If the wrong mode gets activated, it cannot be reversed and the squad will have to attempt to complete whichever mode was accidentally activated.

To activate this mode, hit Saintess Anlu first. If you hit the vines first instead, you will activate hard mode instead. This cannot be reversed.

The squad can attempt this challenge an unlimited amount of times until they succeed. 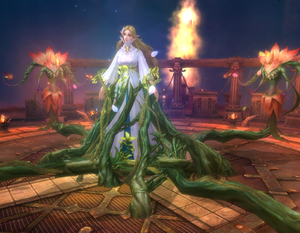 Shortly after attacking the boss, red circles will spawn on each player which are also known as the Saintess' Tears. Players need to move out of these circles or they will be killed after a short time. Players should also count the total number of red circles that spawn on themselves. This is important for the next part.

An easy way to tell if you are in the correct dome is to check your buffs. If you have a

buff, then you are in the correct dome. If you are not in the correct dome, you can use an immune potion (such as Ironguard Powder) and the Holy Path Genie Skill to run to the other dome. Players can also use a long-lasting Faith skill (such as barbarian's Sanguine ΨCornered Beast or cleric's ΨGuardian Light). It is not advised to have buffs such as the assassin's Tidal Protection buff active during this time as they may not receive the

buff even if they are in the correct dome, which will result in death.

Saintess Anlu will also randomly buff herself with a Soul of Vengeance buff and a Faith buff for 20 seconds. Players will receive a warning before this happens. An on-screen message will appear that says "Be careful! The Saintess will reflect all damages after 10 minutes". The on-screen message is not accurate; she will buff herself 10 seconds after the message appears. She will purify herself, and then buff herself with Soul of Vengeance and Faith for 20 seconds. Players should avoid hitting her during this time.

At random intervals, a Sacrifice Monster will spawn and attack a random player. That player will receive a whisper from the Sacrifice Monster. The monster should be killed within 20 seconds. The monster will constantly paralyze the player and deal damage to them. If the Sacrifice Monster is not killed within 20 seconds, that player will die and Saintess Anlu will gain one layer of a protective buff that makes her take 10% less damage. In addition, a Slimy Mud will spawn which will knock players back throughout the fight, including during the dome phase. It cannot be targeted or damaged. 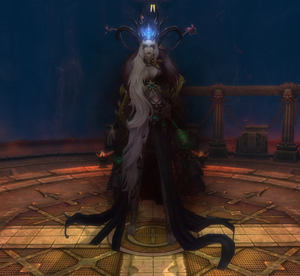 Seind, the main boss for the "easy mode" of the dungeon.

Boss will spawn crystals, and you will NEED to use knockback, or reel and push ALL the crystals into the fan. Otherwise it's a squad wipe. Each time all crystals are in, you spawn a spirit tree. It takes about 2-3 crystal rounds for one fully grown tree.

DO NOT KILL THE SPIRIT TREES AS YOU WILL NEED THEM FOR PART II. For that reason, AoE is NOT recommended.

Also, do NOT DD too hard as the crystals stop spawning at 74 million HP. Rinse and repeat until you have AT LEAST 3 trees for safety.

After you have your three trees, DD boss to 70m and the boss will have a message.

the 6 guards on the perimeter of the dungeon will be needed to protect from the boss's Hellfire technique which one shots you like Oblivion from DHD. Kill the guards for the red circle and stand in them. However, for the red circle, 1 (or more) of them is FAKE, and you CANNOT have more than 2 people in each circle.

Rinse and repeat at 42 million and 14 million until boss is dead. make sure you DO NOT USE AOE or you may kill the spirit trees before phase II. Kill the boss slowly because there is no break between part I and II.

This part is where you use your spirit trees you worked so hard to farm.

Stand under one spirit tree and kill it, then DD the boss after its one shot skill. DO NOT HIT ANOTHER TREE UNTIL THE SCREEN SAYS SO

Kill the 2nd tree when it says so then DD the boss. Kill the 3rd one if necessary later on. Repeat until boss is dead.

This article is a stub. You can help PWpedia by expanding it.

To activate this mode, hit the vines first instead of Saintess Anlu. The squad will have only one chance to attempt this challenge. If the squad fails they will receive a heavily reduced reward instead.

The rewards that players receive from the dungeon depend on which mode was chosen, and whether players succeeded or failed to complete the mode. Players must have picked up the daily quest to receive the rewards.

If players succeed to finish this mode, they will receive the following rewards:

If players succeed to finish this mode, they will receive the following rewards:

If players fail to finish this mode, they will be teleported to a Secret Chamber. Take the quest "Anlu's Wish" from the NPC there. You will receive a reduced reward based on the dialogue option you choose. Collect the Saintess' Tear from the Wonder Bottle nearby, and then hand in the quest.

Players can use their Saintess' Tears in exchange for rewards at Recruit Officer Taylor in Polydeux in the Western Steppes (536, 707).