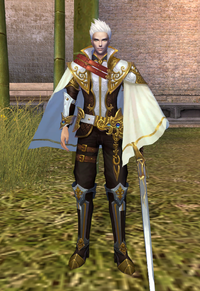 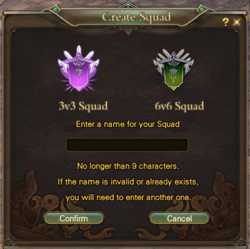 Players that have reached level 100 can form permanent squads at the Arigora Agent Khroatis. Talk to the NPC and choose the option to create a squad. A new window will pop up asking you to choose the format (3v3 or 6v6) and to pick a name for the squad. A one time fee must be paid for the squad formation, after which the squad becomes permanent. The player who creates the squad becomes the leader can invite or kick players from it. You can find your squad's menu by pressing ⎇ Alt+J in-game.

Squad fees are the following:

If a player who has participated in battles leaves the squad, they cannot join another until the Colosseum resets on Wednesday. The player's squad score will be cleared but their personal score will be kept.

Players can choose to enter Personal Matchmaking and participate with random squads. This allows players to team up with players from other servers. However, random squads do not get any rewards and do not count towards the weekly quest. Random squads are for pure entertainment. 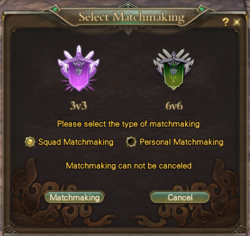 If players wish to participate in battles they need to talk to the Arigora Agent Khroatis and choose the Matchmaking option. A new window will pop up from which the players can choose if they want to enter Squad Matchmaking or Personal Matchmaking. Matchmaking lasts a maximum of 10 minutes and cannot be canceled.

To enter Squad Matchmaking, the squad members need to form teams of 3v3 or 6v6 and have the leader initiate the matchmaking at the Arigora Agent Khroatis NPC. When an opponent has been found, a new window will appear asking each member to accept within 75 seconds. You cannot fight the same squad in a row. It is unknown what are the requirements to be matched with the same squad again. 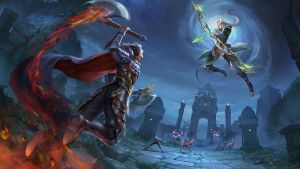 Art of the Arigora Colosseum.

After a successful match, players have 90 seconds of preparation time. During this time, using Colosseum Special Elixir will not cause any other Elixir to go into cooldown but using normal Elixirs will do. Players are not allowed to leave the preparation area during preparation time.

In the Colosseum, flyers, mounts and all kinds of Elixir are allowed. Genie's energy recover rate is reduced to 1/4. When a player is killed in the battle, they will stay in the battlefield as a ghost. They cannot attack others or receive any attacks. Any player who is disconnected before or during the battle will be counted as killed. Each battle can last a maximum of ten minutes.

The first ten battles for a player who has newly joined a squad are Placement Matches. They have to finish ten Placement Matches before they can use Arigora Coins to trade for rewards at the Arigora Agent Khroatis.

Weekly rewards are calculated based on the player's Squad Score. Players who are qualified for the reward can claim it after 08:00 on Wednesday by opening their squad window (Alt + J). If you cannot redeem the rewards try re-logging and make sure you are in a Safe Zone. Unclaimed rewards will be cleared and lost when rewards are concluded.

Players can talk to Sixtus in Neverfall to take the weekly quest "Colosseum Battle (Weekly)". They will receive Arigora Coins for participating in 15 squad battles. Personal Matchmaking battles do not count. The weekly resets every Sunday.

Arigora Coins are the reward of the Arigora Colosseum. They can be exchanged for a number of goods including titles, Special Colosseum Elixir, War Avatar A packs and more. Arigora Coins are also the primary material needed to farm G17 capes and rings. 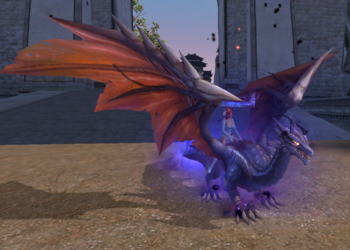 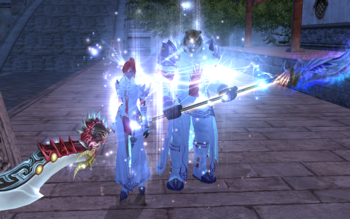 Arigora Colosseum previously had seasons during which teams competed against each other to increase their score as much as possible. During this time players could obtain special titles. At the end of each season, the top 100 players from 3v3 and the top 100 players from 6v6 would receive special rewards including titles, Arigora Coins, exclusive fashion and exclusive mounts.

Currently, the Arigora Colosseum seasons are inactive. It is not known whether there will be more seasons in the future.