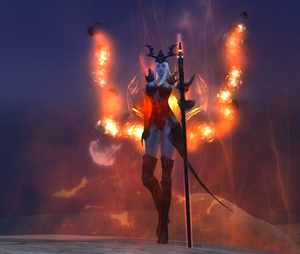 Sibastiana, daughter of the Changeling matriarch.

The Changelings are the primary enemies players have to fight against in their journey throughout the Western Steppes and during their path to their Celestial Saint cultivation. They replicate other lifeforms and silently work towards conquering all of Perfect World. The Future of Mankind Initiative attempted to fight against the Changelings without realizing they had already infiltrated the organization.

Due to the nature of the race, it is unknown what is the true appearance of the Changelings. However, is it known that the ability to replicate is no easy task and there have been cases of Changelings failing to control their form. Changelings that fail to successfully replicate end up with incomplete, deformed appearances and are often abandoned or killed by other Changelings.

The Origin of the Changelings[edit | edit source]

A twisted and horrific people, the Changelings posses unmatched perseverance and determination. As the other races of Perfect World evolved, they hid themselves in the darkness. Their overriding goal was survival. In time they learnt to emulate other civilizations; to clone, replicate, optimize and transform themselves. They are capable of mimicking not only other lifeforms, but weaponry, magic and even the land and rivers. Though Changelings can inherit thoughts, behaviors and emotions from their victims, they are unable to independently reproduce. They can only breed through their matriarch, Aida.

When a Changeling is about to die, a new one will grow and devour the old one. Over the generations, some began to forget they are even Changelings, entirely consumed by the memories of those they are mimicking. However, most still hold deep within them their desire to replace all living beings with Changelings and rule Perfect World. The first to notice their existence was the Light Emperor, Alexander, when he discovered someone was using forbidden magic to bring back the dead. Those who were brought back in this manner had changed a great deal from their original selves. Alexander sent his best lieutenant, Goodhill, to investigate, but lost contact with him. Before he could continue his investigations, though, he became lost in the Primal World.