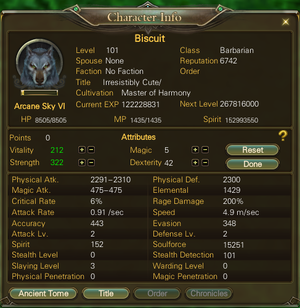 The Character Info window is an interface that displays information about the player's character. It can be accessed by pressing the C key or by clicking the Character Info button on the Control Panel.

This section is located at the top of the window. It shows general information about the character, such as their name, class, level, reputation, and cultivation. It also shows current EXP and Spirit values, along with HP and MP. The character's boundary level can also be found here, if they have unlocked it. The frame around the character's avatar in the window varies depending on which boundary tier they have unlocked, becoming more golden and detailed with each tier.

This section is in the middle of the window. It shows the four main attributes for a character; Vitality, Magic, Strength, and Dexterity. It also shows unallocated attribute points, allowing players to assign them to attributes. Some attributes may show in green; this indicates attributes that have been increased as a result of stat bonuses from wearing certain equipment.

This section is located at the bottom of the window. It shows most stats that affect a character's ability in combat, most of which are affected by the above attributes along with equipment. It shows stats such as attack, defense, critical rate, accuracy, and evasion. Not all stats are listed in the character info window; more stats can be found within the Character Simulator, such as channeling speed.

In addition to showing character stats, the character info window has buttons to the bottom of the window that lead to other interfaces, most of which display more information about the player's character.