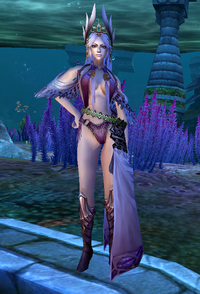 The Mirroflower Kingdom used to be a prosperous kingdom until Lord Tyrant and his wicked son began a war of conquest. A coalition was formed against him, and after a great battle he was sealed within his fortress, but not before he managed to seal the Mirrorflower Kingdom itself. Many years later, the seals begin breaking and the war begins anew.

The Mirrorflower Citizens have a humanoid appearance with pink or blue skin colors and white hair. Some Mirrorflower Citizens possess horns and pointy ears, while others wear hair decorations resembling horns. Parts of their outfits resemble fish fins and they use accessories, ornaments or tattoos to compliment them. Despite living in a seemingly underwater kingdom, they don't appear to possess any aquatic traits.