The Darksnow Fang Event is a daily seasonal kill quest that occurs in Adventure Kingdom during the month of December for Christmas. It is available to players that are level 80+ with a cultivation of Aware of Vacuity or higher.

This event requires a squad of 6 players who should have already obtained an Xmas Monster Slayer Order from the Kindhearted Helper quests, however the slayer order is not required to enter the event dungeon. The order lasts only 12 hours and is consumed when taking the Darksnow Fang Slayer Order quest.

When a squad of 6 members has been made, the squad leader can talk to Santa Claus in Candy Village (311, 531), at the Castle of Wondrous Fate. Squad members do not need to have a Darksnow Fang Slayer Order in their inventory to enter. After the leader takes the Enter Frozen Cavern quest from Santa Claus, all squad members will be teleported inside an event dungeon called Frozen Cavern. If a squad member leaves the dungeon before killing the boss, they will not be able to re-enter on their own; the entire squad must leave the dungeon and then re-enter together.

Upon entering Frozen Cavern all players' stats will drop to a low amount which is determined by their character's class, regardless of equipment. Your health, physical attack, magic attack, physical defense, and magic defenses will be reduced. Other stats such as Attack and Defense Levels will have no effect. This is the exact same effect that occurs in the Gauntlet of Nemesis event.

When dying, Guardian Scrolls will not be consumed resulting in Experience loss. Returning to town will not teleport you out of the dungeon.

The Golden Apples that appear around the dungeon.

Upon starting Frozen Cavern, all squad members will be transformed into Ginger Tigers. In this form you will have access to two skills:

Several Golden Apples will appear throughout the dungeon. The squad must destroy a total of 80 Golden Apples within 2 minutes (120 seconds) in order to make Darksnow Fang appear. Players can check the progress of this task in their quest log or on their quest tracker. It is possible for a minimum of 2 players to complete this part on their own. If the squad does not complete the task in time, the quest will fail and they will have to start it again.

It is recommended to have the entire squad spread out to different areas of the room. It is also possible to stay around 3 Golden Apples and continue destroying them in a triangle pattern due to their fast respawn time.

Once the objective has been completed, all players will turn back to normal and Darksnow Fang will appear in the middle of the dungeon. 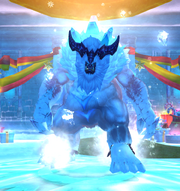 Darksnow Fang is a level 150 boss with 2.17 million health. Be cautious when fighting the boss as all players have their stats heavily reduced. It is ideal for heavy class characters such as barbarians, blademasters, or seekers to tank the boss. It is also highly recommended to have a cleric or mystic to heal and resurrect. All players must be alive when the boss dies in order to get credit for their quest.

Players will only be able to deal a maximum of 200k damage to the boss. It will regularly AoE all players in the room, and paralyze them for a short time. Clerics will not be able to use Regeneration Aura (BB) due to constant interruptions. Players that do not attack the boss or heal others during the fight will only be affected by AoE damage; they will not receive any debuffs or turn into giant bunnies or snowmen.

Around the room are four different beams of light of differing colors: golden, red, blue, and green. Throughout the fight, one or more players will receive a whisper telling them to go to a certain colored beam of light. They will have a DoT debuff placed on them, a magic defense debuff, and another debuff that absorbs healing from skills and potions. These can be purified by going to the beam of light mentioned in the whisper message. If you do not move to this area quickly enough you will be transformed into a giant bunny and will not be able to attack the boss. You can still go to the beams of light to purify yourself of other ailments during this time.

During the fight, a random squad member will receive a whisper and then be transformed into a Snowman Warrior for a short time. They will have access to two skills, both of which can help deal larger amounts of damage to the boss:

Once the boss has died, all players can leave the dungeon by talking to Snowflake. They can then hand in the kill quest at Santa Claus.

Opening the Xmas Monster Slayer Pack will award one of the following items at random: