From PWpedia
(Redirected from Darkstone Oren)
Jump to: navigation, search 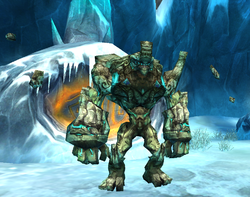 The Oren are a race of stone beings that live in the Inkstone Village and the Icy Snowfield of the Primal World. The Ancient Oren Giant, who was once one of the most powerful Oren, was the guardian of Matchless Valor, the sword of the Frost Emperor Eldros. Unfortunately, the Luneskans, lead by Princess Moonholwer, defeated the Ancient Oren Giant and claimed the Matchless Valor.

The Darkstone Oren are a sub-species of Oren who walked a different path. They fused dark stones onto their bodies which corrupted them and drove them to madness. In the current times, the Darkstone Oren attempt to fight and destroy the Oren. They will also not hesitate to attack the players. The Oren Progenitor suspects the Luneskans may be behind this as the Darkstone Oren appear to be highly organized.

The Oren play a role in the quest line for Astral Sky and ally with Emperor Alexander to fight against the Luneskans after the players protect the Oren from the Darkstone Oren attacks.

The Oren have bodies made of stones of various sizes, shapes and colors. Despite their body structure, they all retain a somewhat anthropomorphic form with distinct heads, arms, legs, fingers and toes. Despite having bodies made of store, the Oren can be injured. They are capable of healing their wounds by fusing new rocks into their bodies.