This article is a stub. You can help PWpedia by expanding it. 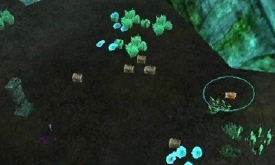 Dragon Temple is a PK-enabled event. Previously, it used to occur weekly, however as of the Neverfall Content Update it has since been deactivated. Instead, it has become a randomly-occurring event as it can be manually activated by a GM.

The event is available to players level 60 and above. You can enter the event through any Adventure Assistant or Khatru Pup, which can be found in any major city. The event takes place underwater, and anyone who dies in this event is teleported back to the starting point, a small safe zone platform, with no Exp loss or item drops.

There are a number of "Temple of the Dragon Treasure" chests scattered across the Dragon Temple area, and you can dig up those chests for various prizes, including Badges of Endurance, pet skill scrolls (including some rare ones that can be gotten nowhere else), Moonwater Keys (which are used in the Hiding Dragon Seal quest), and Temple of the Dragon Records (which can be turned in at Chiao Lingerh (372 523) for random beachwear fashion), though some chests also summon three Temple of the Dragon Elves. Once the chests are dug up, they do not reappear until next week's event, so it is best to start early if you want to find some.

There are also various mid- and high-level monsters that guard the chests or patrol various areas, including Undinox Watchers and the Temple of the Dragon Guards. Even players in their 80's should exercise caution around them.

Within the Dragon Temple there is a quest that can be taken from Chiao Lingerh (372 523), provided you have a Silver Dragon Order and a Moonwater Key. In this quest you visit several pillars, and eventually kill Son of Dragon: Chihwen, which drops ☆Dragonchild's Scale (a -6% channeling and +7~8 magic level 60 evasion necklace) and other items. For details see Hiding Dragon Seal.

For those who don't do Dragon Temple runs, this means that Tuesday nights and Wednesdays are probably the best days to find deals on beachwear fashion and pet skill scrolls in the Auction House.