They are a race in which are not born, but revived, only when there is great danger. The Earthguard have risen from beneath the ground to help the other races prepare for the oncoming Armageddon. They protect using the powers of wood and metal. The Earthguard race includes the Mystic and Seeker classes. Most Earthguard have a "third eye" upon their forehead. Their meditation appears as a patch of flowering vines growing around the character (orange for males and green for females).

After the gods created Perfect world, they departed to the Sacred World to rest. In the years following the first conflict between the Winged Elves and the Untamed, chaos and death reigned across Perfect World. The spirits of those who died did not pass on, but lingered, creating an imbalance of yin and yang that threatened the whole world. To avert disaster, the gods created a realm for the spirits to dwell in. They sent their servant, Radiance, to guide the spirits to this realm.

The good souls were allowed to sleep peacefully, while the evil souls were sealed away with the Wraiths. In 889, a dark meteor flashed across the sky. Its energy warped Radiance, creating a twisted, evil personality called Dark Radiance who began turning the wicked souls into Wraiths and sending them back into Perfect World. To combat his other self, Radiance trained the virtuous souls to battle the Wraiths and granted them a third eye to focus their powers. These spirits were the first Earthguard, and it was their solemn duty to defend Perfect World against the Wraiths whenever they might appear. 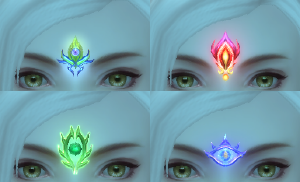 Some of the different third eyes Earthguards can have.

The earthguard look similar to humans, though their in-game models have improved complexion compared to human in-game models. They also have a "third eye" on their forehead, of which can be varying colors such as blue, green, pink, red, or purple. The "third eye" is an optional customization feature on in-game models. Their meditation is visually different from other races; it appears as a patch of flowering vines surrounding the character. The flowers also differ in color according to the earthguard's gender; males have orange flowers, while females have pink flowers. 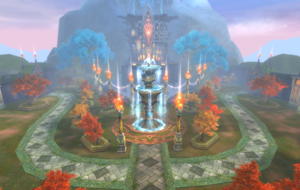 The main town of the Earthguard. Tellus City lies to the south of Perfect World near to the sea. It is surrounded by high hills, with valleys dug deep to the west of the city. The valleys are home to many of the races' shrines including the Shrine of the Ancestors, Shrine of the Immortals, and the Forgotten Sanctuary. The cities' watch also keeps a close eye on the creatures known as the Chimei. A tribal race, they hold land in the regions such as Starry Wilds and Snowdragon Heights.

A nature lover at heart, Mystic's are valued as a supportive healing class. They draw their power from the earth, summoning plants and avatars to do their bidding. A Mystic is also able to lure with their summons. Magic summons tend to be a better boon for damage or protecting. While they have no purifying skills that a Cleric possesses, they have some of the fastest healing spells in the game.

Seekers are the Earthguard's physical class. Like other physical classes, usually wear heavy armor, but what separates them from the rest is that they have a balance between melee and ranged attacks. This makes Seekers more flexible than a Blademaster or Barbarian, although Seekers somewhat lack the ability to stun (crowd-control) that Blademasters have and the high HP that Barbarians possess. Seekers have three sword stances. When one is activated, there is a chance that the offensive player/mob will be afflicted with that sword stance's debuff. The Seeker can then follow up with a certain paired move, which results in extra damage and stuns/paralyzing/etc. This is all based on chance though. Seekers are also good at damaging multiple foes at once since seekers have a variety of AOE skills.