A Faction, also known as a Guild, is a group that players can join for common goals, companionship, PvP activities and more. Members of a faction can communicate with each other via their own private Faction Chat, have access to a Faction Base provided it has been unlocked, and participate in several activities such as Territory Wars, Resource Wars, and Dragons' Conquest. Players that are a part of a faction will have the name of their faction displayed above their character. The Faction window can be accessed by pressing the G key.

In order to establish a faction and become its leader, the player must be level 20 or above, and not currently be a member of an existing faction. There is also a 100,000 fee to create a faction. To establish a faction, the player must talk to the Faction Supervisor, located in East Archosaur (572, 656). There they will be prompted to select a name for the faction. The name must not already be taken, and may not contain offensive language and certain numbers, spaces, foreign characters, or symbols.

Once the faction will be established, you will be assigned leadership of the faction.

There are a total of 3 levels for a faction. Each level indicates the amount of members that the faction can have. Factions that are level 1 also have access to certain other features such as being able to have their own Faction Base. To upgrade your faction's level, you must speak to the Faction Supervisor, located in East Archosaur (572, 656) and have the correct amount of coins to upgrade the faction. Note that once you have upgraded your faction to at least level 2, you will not be able to disband the faction.

To join a faction, you must not already be a member of an existing faction. There are two methods to joining a faction: 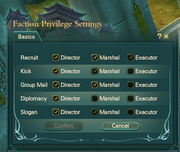 Privilege settings, only editable by the leader.

Within a faction, you have the ability to promote members to higher positions, which is collectively known as officers. By default, members are known as Commissioners and do not have any special abilities within the faction. There are a total of 4 different officer tiers, each with a limited number of positions.

Factions that are level 3 have the ability to have their own unique faction icon or faction logo. To submit a faction icon you must do so through the Faction Icon Submission page and follow the instructions provided there. There are restrictions for the faction logo:

Once the faction logo has been submitted, faction leaders will have to wait a few weeks or more before their logo is added into the game. This is usually done through a server maintenance and are usually done in bundles, so your faction logo may not be added until other factions have submitted logos as well.

Once the logo has been added to the game, it will show to the left of your faction's name above your character's head, as well as on territories you may own through Territory Wars and Dragons' Conquest, and in other places throughout the game.

To create a policy relation, the faction leader or the director can open the Faction Menu, and choose Policy. Then, they have to choose a neutral level 3 faction to request for allied or hostile status. This will cost 3,000,000 coins. The request receiver should reply to it within 24 hours. Either accepting the allied status request or declining hostile status request will cost 3,000,000 coins.

Either side of a policy relation can request to cancel their relations. If the other faction accepts, then the two factions will return to neutral status; if declined, then their relation will remain. Of course you can choose to forcefully end the relation at a cost of 6,000,000 coins. If you ended a policy relation, you can not get another one within 30 minutes.