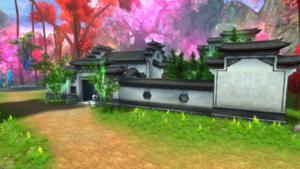 The Headquarters in the Faction Base.

A Faction Base is an instance unique to each Faction. It contains within it NPCs that provide a Faction's members with special items, power-ups, and services. It also houses the ten Faction Trials, named the Ten-Dimensional Domain. The Faction Base can be entered by talking to a Faction Base Manager, located in Archosaur (571, 656), Etherblade (440,868), City of Plume (337 430), City of Lost (248,648), and Raging Tides (656,133). Players can also teleport to it using the Back to Base skill if the Faction Talent has been activated. If you have recently joined a Faction after previously leaving a Faction you will not be able to enter the Faction Base for 7 days.

Long ago, the Archdemon Isrifar and his minions ravaged Perfect World.

In order to eliminate this dark force, several large groups of soldiers were sent to defeat them but fell in battle. The Elders of Perfect World gathered together and decided to send several powerful Factions. When they defeated Isrifar's minions, though, he swallowed everything in a flash of red light.

Though the Elders did not know what had happened, for the time being his evil was sealed.

It would not last.

A hundred years later, a red flash swallowed the Faction Bases as Isrifar's century-old blood curse activated, and the once-sealed Ten-Dimensional Domain returned! Worryingly, there were reports that the deceased Lord Tyrant was alive within the labyrinth. The Elder of Archosaur has once again called upon the Factions to send their members into the Ten-Dimensional Domain, and to prepare for a deadly battle that will determine the fate of Perfect World.

The Faction Leader can establish their Faction Base by speaking with Faction Base Manager Zeen and selecting the "Establish Base" option. He is located in the East district of Archosaur (571, 656) and also in most major cities in the Midlands.

In order to establish a base, the following requirements must be met:

To receive a Faction Base Contract, the Faction Leader must have one of the following:

There are three different types of stats:

Faction Goals allows members to work together to gain a high amount of Loyalty Points or Loyalty Funds. Most Faction Goals require a Faction Squad, a squad that consists of 8 Faction members, to complete a certain dungeon in a certain mode. Some Faction Goals do not require Faction Squads or dungeons. By default there are three goals available to all factions, however extra goals can be purchased as secondary Faction Talents.

Faction Goals reset each week on Monday at 12:00AM. Faction Goals unlocked through Faction Talents will need to be unlocked again.

The Faction Pet is a creature that resides in the Faction Base that all members work together to take care of during the day. Members can interact with the pet to keep its stats high and for entertainment. It will also reward members once every 24 hours depending on its stats when a player claims a prize.

The Faction Pet has three stats. Each one will decrease by 20 each hour, so they must be maintained constantly.

The Faction Pet's form can be changed at any time by any Faction member. This can be done by clicking the Switch button in the Faction Pet interface and clicking Yes. You cannot choose which form it takes; it will simply rotate between Smiling Sheep, Sneeze, and Big Bear in that order.

There are several activities that members can do with the Faction Pet. Most activities will help to replenish the pet's stats. 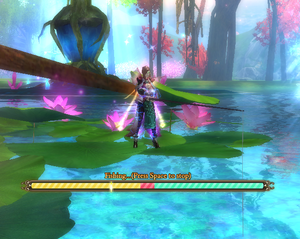 A player fishing in the Mirror Pond.

Members can go fishing to catch fish to feed the Faction Pet to replenish its Hunger. When a member enters the Faction Base for the first time, there will be a tutorial quest available to show them how to fish. After that, the Faction Pet will offer 5 Fish Baits per day.

To go fishing, you must take the Fish Bait to the Mirror Pond in the Faction Base, around the area with the lily pads. If you are in the correct area, the Bait in your Inventory will be able to be used. Using the bait will put your character into a fishing mini-game. A bar will appear on the screen with a marker that constantly moves across it. To stop the marker, press the Space key and your character will catch a fish.

There are four different fish that the player can catch. Each fish varies in quality, and determines the amount of hunger it will replenish for the pet.

The type of fish you can catch depends on where the marker stops on the bar.

As an alternative to fishing, members can also farm for crops to feed to the pet. There is only one farm which any member can interact with, so is a slower way to gain food but does not require any extra items. Farming can be done at the Peach Grove Residence in the Faction Base by interacting with the Windmill. There are four phases to farming: Plough, Water, Fertilizer, and Harvest. Each phase takes roughly 1 hour and 12 seconds to complete, meaning that it takes a total of 4 hours and 48 seconds to farm Pet Food from start to finish. Completing the phases will yield 4 Pet Food, which replenishes 15 Hunger each.

To proceed through each phase, the member must click the Start button within the Faction Pet Planting interface. A timer will then begin to run, indicating when the current phase of planting will be completed. The plants will also slowly grow. Once the timer has run to 0, the plants will stay dormant until a member comes back and starts the next phase.

A member can choose to select the Auto Planting option to allow the plants to grow through all four phases automatically without any further interaction required. A setback for this option is that only 2 Pet Food will be yielded instead of 4 Pet Food. To set Auto Planting, the member must check the box before they begin the first phase of farming, planting. Auto Planting cannot be turned on or off while plants are already being grown.

Every 24 hours, members can receive a reward from the Faction Pet depending on its stats. There are three different tiers of prizes:

The Faction Merchant, Rayu, is located inside the Faction Base just through the entrance to the house, near where the player spawns inside of the base. She will offer to sell members exclusive items for Silver Coins, and also offers exchange options for more items using materials obtained using Chivalry Points and a Silver Coin fee. There is also a Faction Merchant located in East Archosaur (572, 656), but she will only offer exchange options for a smaller selection of items compared to the merchant inside of the base.

All items in the shop only cost Silver Coin, and do not have any other requirements other than what is listed on the item.

The Faction Designer is located within the Faction Base, in a small area near where the player spawns in the base. She can be found by going through the gate to the house and immediately turning and going left. She will exchange Faction Base materials and Silver Coins in exchange for Faction Uniforms, unique fashion sets for Faction members. Each set contains a top, pants, shoes, and gloves, and the pieces are a fixed color and therefore cannot be dyed.

Below is a list of the different fashion sets. Note that sets of both genders are listed in the exchange window, and are not refundable if you choose the wrong one.

The Faction Safe is a special type of storage designed to hold items for use with Faction-related activities, such as event items or prizes from Territory Wars. It can be accessed by speaking with the Faction Stashkeeper, located at the Headquarters towards the back. By default, the Faction Safe is not activated and must be done by the Faction's Leader. Unlocking the safe requires a minimum of 300 Loyalty Points, after which the Leader will require a Faction Safe Stone from the Boutique which costs 10 gold. If the Faction has at least 4,250 Loyalty Points however, then the Faction Safe can be unlocked with a Ten Million Big Note instead.

Members can repair at any NPC that would normally offer a repair service, such as a merchant. The buy/sell window will have two Repair buttons at this point, with the rightmost button being for Faction Repair. This can be checked by hovering over the button. Clicking this button will open a confirmation window that will state how many Silver/Gold Coins the member will have to pay for their repairs, and how much of the Faction Repair Fund will be used. The Faction Repair function can only be used to repair equipment the member is currently wearing, and they cannot individually choose which pieces of equipment to repair.

Activating Faction Talents costs 500 Loyalty Funds for each level that the leader unlocks. The talents reset each week on Monday at 12:00AM.

During each hour at the same time that the Faction Pet's stats decrease, a random scripted event will occur inside the Faction Base. Certain NPCs will appear and walk around your Faction Base while talking. They do not provide the player with anything other than amusement. They will only be present for a short time before disappearing. The events that occur each hour are random.