Firecrag Grotto is a lower level dungeon located north of Thousand Wood Ridge, which is north of Etherblade. Its main purpose was to serve as the FB19 for Human blademasters and wizards, though it is not commonly completed anymore since Celestial Vale was released as the starting area, making the dungeon fairly obsolete for lower level players. There is still a Call to Duty quest available for the dungeon at level 19.

Firecrag Grotto is a small-sized cave with lava pools throughout, and one of the lowest level instances in the game. It serves as one of 3 instances used as a FB19 for the original 3 races (Winged Elf, Human, and Untamed). The dungeon is filled with various Wraiths, such as ants, centipedes, and carapests. There are two Call to Duty pillars in the cave - one at the beginning of the cave, and another in the boss room.

You can give 1 Osmanthus Wine to the Old Swordsman at the entrance of the cave. In exchange, he will remove most of the Wraiths from the cave. This is generally not recommended as Firecrag Grotto is one of the lowest level instances and therefore one of the easiest to complete.

There is only one boss in the Firecrag Grotto. 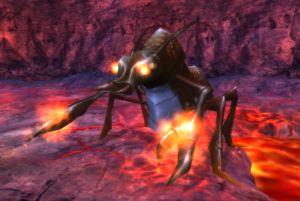 Thromh the Mighty is a large ant-like Wraith that serves as the sole boss for the instance. It is located in the northeastern room of the dungeon, standing at the very end of the room. The boss has two Wraith followers.

This battle should be fairly simple and straightforward. Thromh the Mighty attacks at melee range with physical damage. Partway through the battle, it will buff itself with extra attack speed for a short time. Towards the very end of the battle, the boss will attack the tank with a bleeding damage-over-time (DoT) skill.

Thromh the Mighty is one of the bosses that may drop a tier 1 or a tier 2 Nuema.

The following quests take place in the Firecrag Grotto: