From PWpedia
(Redirected from Genie)
Jump to: navigation, search
This article is a stub. You can help PWpedia by expanding it. 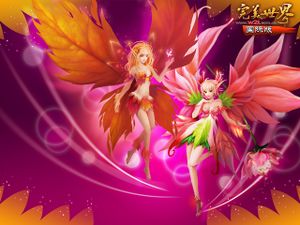 Genies were introduced in the PWI Age of Spirits expansion. They are non-corporeal entities that can assist in battle by casting buffs, debuffs and using new and unique abilities. Players can use a Genie to complement their chosen class and round out their game play.

Before the worlds were created, the universe was in chaos, there were no elements, no creatures, no feeling and no thought. As billions of years passed, things began to evolve. After the creation of Perfect World, creatures with intelligence appeared. At the same time, the five elements, developed thoughts and wills of their own, and finally evolved into a mystic beings known as Genies.

Genies are the children of the five elements. They know how to use elemental skills innately and have a basic instinct to maintain the balance between all of the worlds. Genies mainly live in the Elemental World, seldom of them can be seen in Perfect World. However, things are changing.

In the endless war between the denizens of Perfect World and the Wraiths, the balance of the world has been tipped. The Gods have been absent, Wraiths have been endlessly attacking, and the armies of the Underworld have been rising. The Genies have risen to save Perfect World and begin the return to balance.

Genies are skilled with the elements, and wield mighty power in Elemental World. However, once in Perfect World, their ability to control elements will be diminished. In order to improve Genie's ability, you will need to upgrade them by infusing your EXP or letting them eat EXP Pill.