From PWpedia
(Redirected from Glyphs)
Jump to: navigation, search
This article may need cleanup to meet quality standards.
Please help improve this if you can. The Discussion page may contain suggestions.

The Glyph System is a skill-enhancing system added in the PWI Neverfall expansion and is available for players that have reached their Chaotic Soul Cultivation or higher. Players can combine their Sage and Demon skills and then equip Glyphs to further enhance the power or effect of their skills. 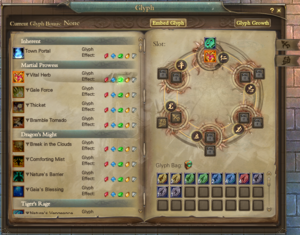 Players can unlock their first Glyph slot once they gain access to the Western Steppes by completing the quest given by the Glyph Master of Mercy, an NPC located outside the City Hall of Neverfall.

Subsequent Glyph slots can be unlocked by doing quests received from the rest of the Glyph Master NPCs, located outside the City Hall of Neverfall. The list of the NPCs is the following:

Once a quest has been completed, the player will receive an item that they can right-click to use, and the Glyph slot will be unlocked. Players can also buy Glyph slot items from the NPCs by paying 10,000,000 Silver Coins, but it is recommended to do the quests so the slots can be unlocked for free.

There are five types of Glyphs and each type offers a different skill effect:

There are multiple ways of acquiring Glyphs including the following:

Bosses in Icebound Underworld also have a chance of dropping tradeable Glyphs such as level 4 Glyphs, but the drop rate is not known.

In addition, completing Uncharted Paradise in Deicide Mode or Dawnlight Halls in Deicide or Judgment Mode has a 70% chance of spawning a Mysterious Merchant. The merchant may offer LV1 or LV4 Glyph Packs in exchange for gold or Silver Coins.

Players can take the Soul Purification weekly quest from General Summer in Nordeville to kill Changeling Commander Haspon. He is located at the Path of Sorrow nearby (453, 476). When he is killed, players in the squad that dealt the most damage will receive a 72 hour timed Corrupted Soul, which can be combined with a Yin Yang Twin Stone obtained from the Darkness of Magnier daily quest to make a Pure Soul. Completing the weekly quest will reward players with six level 2 Glyph packs along with other prizes.

Players can exchange 1 Lucky Coin for a level 1 Glyph of their choice at Assistant Wang Tsai, usually located next to the banker in most major cities.

Season rewards for PvP events may include Glyph packs.

Sometimes there will be special, time-limited events or promotions for those who charge Zen or spend Gold. These promotions may include Glyph packs as rewards.

Level 1, 4, and 7 Glyphs are all tradeable and can be sold to or bought from other players. 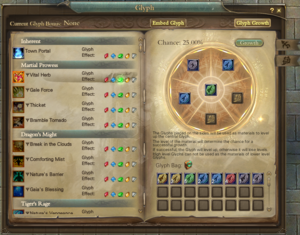 Glyphs can be leveled in order to increase the power of the effects they offer to skills. There are four tiers of Glyphs and all Glyphs under the same tier offer the exact same skill effects regardless of the Glyph's level.

In order to level Glyphs, players have to combine them. To do this, open the Glyph menu by pressing the R key in-game and then select the Glyph Growth tab at the top. Place the Glyph you wish to level at the center. The Glyphs placed around the central Glyph will be used to feed the central Glyph.

Apart from skill effects, Glyphs also offer stats for your character. The higher level the Glyph is, the better stats it offers. You can see the stats by hovering over the Glyph icons. The stats are class-dependent so the values may vary, but depending on the Glyph's level characters can get more HP, physical defense, magic defense, physical attack, magic attack, spirit, attack levels, and defense levels.

When a player has all six Glyph slots unlocked, they can activate a Glyph bonus by using Glyph on specific skills. When the majority of the skills with Glyphs belong to one property, then the character will receive that particular property. If the skills of different properties are equal in number then no bonus will be activated. 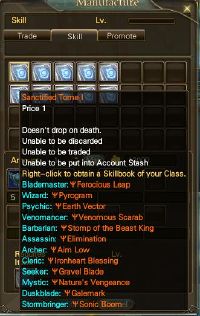 Skill books can be acquired by exchanging Neverfall Squire's Badges and Neverfall Knight's Badges at the Royal Knight Hector in Neverfall (349 593).