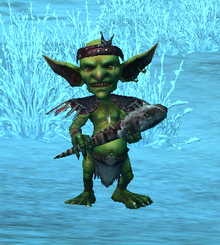 The Ice Goblins are a seemingly all-male race that live in the Ice Goblin Camp, southwest of Luneska City in Primal World. Initially they are aggressive and attack the players, but the Ice Goblin Master later reveals that they were forced to help the Luneskans and were not able to stand against the Luneskans on their own. They fight using clubs, hooks or daggers and other small weapons.

They play a minor role in the quest line for Astral Sky and give players important information to help them defeat the Luneskans.

The Ice Goblins are very short and have a green skin color. They have big heads with big ears and big noses. They also posses claws. The Ice Goblin Master has small horns on his head which may indicate age or rank. Ice Goblins appear to wear clothes that greatly resemble pirates and sailors, but it is unknown if they are real sailors as they don't appear to posses any ships.