Legend of the Forgotten Frostlands 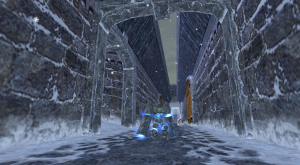 In Archosaur City, there spread a ballad sung by travellers with phrases about the Forgotten Frostlands; songs spoke about the power and influence this city had which can equal that of Archosaur itself.

This report shocked the whole continent. All kinds of speculation spread over. Were the Frostlands buried underground because of the the 10-year snow or with the vast knowledge of the people, have they assumed control of the entire Frostlands and hid them from the world?

The Archosaur Emperor gathered his lords and discussed strategies on how to unearth the Frostlands hiding secret. After 6 months of discussion, they yielded no resolution.

A hundred years later, the explorers of the northern city had an astonishing discovery. They found the trail of some young explorer. The trail leads to a tunnel that shows some castle remnants and destroyed buildings. Unfortunately they also discovered the explorer's incomplete corpse. In the body of the Xiao Lin, they found a journal regarding the re-emergence of this mysterious castle. Fear, panic and inconceivable messages filled the journal. Xiao Lin clearly described the two monsters that attacked him. Although their origins are not clear, they are the two of the most notorious villains - Glacix Elemento and the Arch Aeolian Shadow. Xiao Lin also wrote the method how to bind the monstrous Glacix Elemento. The journal stopped at the part where they had reached the entrance of the castle at the end of the tunnel.

When the city elders found out, they decided to sponsor lots of money to the 10-person team, composed of the top explorers in the world, to discover the mysterious castle in the northern part of Perfect World. The mainland city waited anxiously for any word from the expedition team but after waiting for some time, still no message was ever heard from them.

Why are there corpses piled high at the entrance? From the positions of the bodies and the weapons scattered around, it was clear that fierce fighting occurred. Why did they fight? For what purpose? Could the sudden disappearance of the Frostlands and the mysterious appearance of the secret tunnel possibly relate to each other? Is that tunnel leading to the lost Frostlands or some other underground place unknown to the surface land? No one knows, because no one has come to the end of tunnel and went back to the surface to speak of it.