Legend of the Twilight Temple 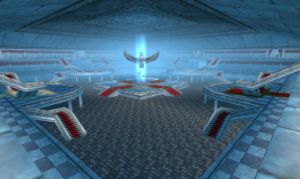 Aria of Dawn inside Twilight Temple.

On the Year 1000 of the creation of the Perfect World (hereafter abbreviated as PW), a human nation arose rapidly in the western corner of the continent. Since this country is located in the land where the sun sets, it became known as the Sundown Nation, or the Twilight Empire.

It was during the so-called Millennium War between the Humans and the Winged Elves that the Twilight Empire, under their cruel and bloodthirsty king Tsang, began a series of campaigns that conquered scores of neighboring nations. Among these nations, it was the elven nations, the enemies of the humans, that suffered the most. Even a few of the weaker human nations were not spared from destruction. Within a short span of thirty years, the Twilight Empire transformed from a small unknown nation into a powerful empire whose influence was widespread throughout the western lands.

Legend has it that Tsang had once, by accident, acquired a mysterious mask. This mask was cast from gold and possessed incredible power. It was through the power of this golden mask that Tsang's forces were able to emerge victorious in every battle.

On 1038 PW, Tsang passed away due to illness. Just three days later, Tsang's eldest son Prince Pohan died of a mysterious illness. After a prolonged period of power struggles within the royal court, Tsang's second son Mingwen, who was barely ten years old, was enthroned as king on the year 1040 PW. As Mingwen was too young to rule, the court officials unanimously elected Premier Zichun as Regent, as well as forming a Council of Seven to assist in the management of the kingdom's affairs. From this point onwards, the actual control of the Twilight Empire fell into the hands of Zichun.

After the death of Tsang, no one is able to unleash the power of the golden mask, therefore Zichun ordered his subjects to inter both Tsang's body and the mask into the Twilight Mausoleum. The mysterious golden mask, together with its hidden power, began its long repose within the mausoleum.

Zichun continued Tsang's aggressive military policies and began to expand towards other territories at an incredible rate as well as quelling internal unrest within the kingdom. The negative effects of years of repressive governance had begun to appear. Within the kingdom, internal dissent intensified and manifested in a series of small-scale uprisings throughout the kingdoms. On the battlefields abroad, due to the fatigue brought about by years of constant warfare, as well as the lack of the support from the golden mask's power, the army was forced to slow down its advancement.

The fall of the Twilight Empire[edit | edit source] 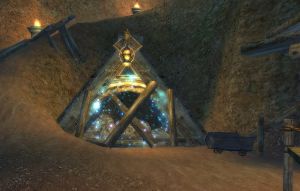 Just like the numerous historical empires with illustrious pasts before it, the Twilight Empire, upon reaching its apex, began its inevitable decline. The scales of fortune began to sway away from the repressive and battle-scarred Twilight Empire.

As the Twilight Empire descended into peril, the regent Zichun suddenly remembered the late king's golden mask that had aided him in his long string of conquests. But the mask has already long been sealed within a secret room inside the mausoleum, and only the blood of a royal family member is able to unseal the room. Zichun secretly summoned the Council of Seven and decided, in a desperate bid to retrieve the golden mask, to assassinate the late king's daughter Princess Mingyue.

General Zhongliang was tasked with the assassination, but he had actually been admiring Mingyue for a long time, and could not bear to kill his loved one. Therefore, he betrayed Zichun and revealed the plot to the princess, as well as advising her to escape with him.

After being informed about the betrayal, Zichun became enraged and dispatched his soldiers immediately to capture the two escapees. The two of them were discovered by the search party at the outskirts of the capital city and was forced to seek refuge within the mausoleum. As the mausoleum was a forbidden zone of the royal family, the search party dared not enter and went to report back to Zichun instead.

Zichun then personally led the Royal Guard and stormed into the mausoleum, and was astonished that the secret room located in the deepest corner was already unsealed and opened, and that the late king's corpse as well as the golden mask were both missing. Even more frustrating for Zichun, the Royal Guard, despite combing the mausoleum extensively, were unable to find Mingyue and Zhongliang.

The mysterious disappearance of the late king's corpse and the golden mask, as well as the unknown status of Mingyue and Zhongliang, became an unsolved mystery within the Twilight Empire, and would remain within the minds of the kingdom's citizens for a long time. The search was continued for a period of time before petering out eventually.

After the loss of the golden mask, Zichun began to seek out other ways to avert the kingdom's crisis. The Council of Seven suggested activating an ancient summoning ritual so as to tap onto the powers of an ancient demon to destroy the invading forces. This particular ritual was known as the "Wheel of Fate". The entire ritual would last for forty-nine days, and would require the services of thousands of powerful mages, as well as an offering of three thousand boys and girls and countless gold, silver, jewelery and silk so as to unseal an ancient demon and establish a contract with it. Legend has it that this ancient demon has the capability to wipe out an entire army instantly. 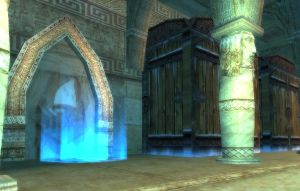 However, this particular ritual carries tremendous risks with it. That is, if the summoned demon went out of control, the summoners as well as the city which they are summoning in will be obliterated by the demon's immense destructive powers. Nevertheless, the Twilight Empire, facing both external and internal crises, had no better choice, and Zichun decided resolutely to commence the "Wheel of Fate".

Within the Twilight City, the citizens, already enraged by the "Wheel of Fate" ritual, went on large-scale rioting, resulting in massive clashes between the citizens and the soldiers within the city streets. Casualties were high, and those who escaped and surrendered to the Allied Forces were even higher.

The Allied Forces began their assault on Twilight City, and the entire city became permeated with the stench of death and war cries. The once illustrious and grandiose city, under the ravages of war, had turned into a living hell. The dying Twilight Empire was facing its final ordeal before its destruction.

Seeing that the game was as good as over, Zichun decided, at all costs, to accelerate the "Wheel of Fate" summoning ritual.

On March 1044 PW, Twilight City fell. The Allied Forces swarmed into the city, rapidly occupying key locations within it. But it was then that the "Wheel of Fate" ritual was completed. A gigantic demon descended from the skies, madly destroying everything within its wake. It was an entity of near-invincibility; its gigantic size and its power was nothing anyone who was present in the scene had ever experienced before. All of the people and every structure were obliterated like ants.

Finally, following a tremendous howl that reverberated around the skies and the earth, a massive explosion erupted from Twilight City, and calm returned almost instantaneously. Besides a few broken wall sections and roof tiles, there were no other signs of life among the ruins.

From that night onwards, the Twilight Empire was wiped off from the world map. This short, yet illustrious empire, would hence be buried within the sands of time, and just like everything else, would appear as if it had never existed before.

Five thousand years later, people discovered, from the Twilight Empire ruins revealed by the shifting sands, an underground secret passage that led to a catacomb. The legends of the Twilight Empire as well as the stories regarding the golden mask and the Wheel of Fate began to surface onto the realm. People began to speculate, that within the dark and brooding catacombs lies innumerable treasures, valuable tomes that will explain the mysteries of the world, as well as an unspeakable force that will wreak utter destruction…