Legendary Pets are the ultimate pets a Venomancer can have. For general pet information visit the General Pet Guide.

How to obtain a Legendary Pet[edit | edit source]

Legendary Pets are pets that can be bought from the Boutique or other players who sell them. They are costly and because of that they have certain advantages over free pets. They are usually the final goal of Venomancers as far as pets are concerned. Legendary Pets are not necessary to play the game, especially in PvE, but they do grant the player advantages and abilities that surpass free pets in certain situations.

In order to obtain a Legendary Pet you have to buy certain items from the Boutique and exchange them for the pet ticket at Ms. Zoologist in Archosaur or the PW Market Agent. The items and tickets are trade-able, but once the ticket has been opened the pet is bound to the account (it can be account stashed).

The requirements are the following:

All items are available in the Boutique or from players in-game. The Source of Force & Phoenix Feather are also available in the Battle Pet Packs. The Baby Hercules and Baby Blazing Phoenix tickets can also be obtained through Perfect Chests chance packs from the Boutique. All Legendary Pets start at level 1. Harpy, Monkey, Corgi and Battlebot are all-environment pets since level 1. The Phoenix is an air pet until level 100. The Hercules is a ground pet until level 100.

How to save money for a Legendary Pet[edit | edit source]

If you can't or don't want to spend real-life money and charge gold for the pets, here are some tips for saving money. Note that farming methods that are mentioned in the below guides may be outdated, as many items are now bound to the character. In addition, untradable Silver Coins drop from monsters, and most items sold to NPCs will only generate Silver Coins.

You should also ask other players for more up-to-date information.

Reflect (Level 5): Reflect 70% of melee damage back at attackers.

Attack all enemies in straight line within 10 meters and increase threat level, deal 100% damage of basic attack. Reduce damage taken by 15% for 15 seconds.

The Hercules is the best tanking pet. It enables you to pet-tank bosses and solo your own instances as you level. It's the pet of choice for those who want to farm instances for profit. The downside is that it's a strictly ground pet, so you won't be able to use it underwater or in the air until you evolve it at level 100.

Upon turning into a Celestial Giant after evolution, it gains access to a powerful aggro skill which also grants an almost permanent 15% damage reduction buff. Certain moods can give it additional aggro skills, defense buffs or self-heals. You may choose to remove Pounce and teach it Blessing of the Pack (HP buff) or the Faction Base equivalent.

With the help of the upgraded Heal Pet, the Celestial Giant is capable of tanking strong bosses like Toad in Flowsilver Palace or Lord of Paradise in Uncharted Paradise. It can even tank the dragon in Dragon's Conquest, provided it doesn't get attacked by other players.

Blessing Of The Pack (Level 5): Increase Maximum Health by 30%.

The Phoenix is a "jack of all trades, master of none" pet, though this mainly applies after its evolution at level 100. Prior the evolution, the Phoenix is an air pet with high damage and the ability to tank fairly well, better than any free air pet.

Upon evolution, the Phoenix can fill any role depending on how you build it. It can be a decent tank pet by teaching it Strong and Protect (or the Faction Base equivalent), it can be a damage dealing pet by rolling offensive Inherit Stats and damage oriented moods or it can be a PvP pet by rolling PvP moods. Alas, it's not going to excel at anything as other Legendary Pets will perform better at their respective roles.

Attack all enemies within 10 meters inflicting physical damage equal to 200% of base attack and stun the targets for 3 seconds. 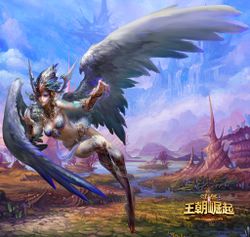 The Harpy is a PvE pet. She has low attack stats, but her skills deal additional damage on monsters and she has a self-buff, after the evolution, to increase skill damage dealt on monsters. In short, her damage comes from the way her skills and buffs work.

Due to the spam-able nature of her skills, she doesn't need to auto-attack so she can take full advantage of skill damage buffs like Wraithslayer. She's particularly great in high level instances where bosses usually have anti-aps buffs that cause pet auto-attacks to be very weak.

Her range allows you to stay out of boss AOE damage range when she is tanking. Her primary AOE skill can be set up as a continuous AOE if there is a suitable target. She also has a ranged AOE monster-only stun. Though her defenses and HP are better than most free pets, she is vulnerable to physical damage.

Deal physical damage equal to 300% of base attack and increase attack power by 30% for 10 minutes, freeze the enemy for 2 seconds.

Attack all enemies within 6 meters, deal 100% of physical attack and stun the enemy for 2 seconds.

Flesh Ream (Level 5): Bite an enemy, inflicting base damage plus 200% of Pet's base damage over 9 seconds.

Reduce damage from players by 60% and increase max HP by 30%.

The Monkey King is currently the best PvP pet, though it can perform well in PvE, too. It comes with the following stunlocking skills: single target 2 second freeze (15s cooldown), ranged AOE 2 second stun (15s cooldown) and single target stun. These make the Monkey a good support pet for PvP.

Although the Monkey has pretty good damage, it's not good enough to hurt endgame geared players. Thus it's best to build the Monkey for survival and teaching it defense buffs.

Deal physical damage equal to 300% of base attack and increase attack power by 30% for 10 minutes, freeze the enemy for 2 seconds.

Blessing Of The Pack (Level 5): Increase Maximum Health by 30%.

Flesh Ream (Level 5): Bite an enemy, inflicting base damage plus 200% of Pet's base damage over 9 seconds.

Increase attack rate by 30% for 30 seconds, and become immune for 6 seconds.

The Corgi is the PvE "jack of all trades, master of none" pet. It has good base stats so it can be built as a tank pet by teaching it Strong and Protect (or the Faction Base equivalent). Such a Corgi can rival the Celestial Giant and have better damage on top of it. However, it lacks the Celestial Giant's aggro skill options. To compensate for that, you will have to roll for a mood with aggro skills and/or teach Corgi the skill Roar.

It can serve as an utility pet by teaching it debuffs or Shriek for interrupting bosses, all while having decent DD and stunlock skills. Its immunity skill coupled with the upgraded Heal Pet can help it survive some situations that other pets might be unable to.

To the enemies within 10 meters of the target, deals physical damage equaling to 120% of pet's base attack. Stuns monsters for 3 seconds.

Deals physical damage equaling to your attack to the target and increases attack rate by 25%.

The Battlebot is a primarily PvE pet. It specialises in ranged physical single target damage, but includes a skill that stuns enemies around the pet. Its range allows you to stay out of boss AOE damage range when it is tanking. It has good defenses allowing it to survive well.

Due to the spam-able nature of its main skill, it doesn't need to auto-attack so it can take full advantage of skill damage buffs like Wraithslayer. It is particularly great in high level instances where bosses usually have anti-aps buffs that cause pet auto-attacks to be very weak.

Some legendary pet skills are exclusive to the pets and if you unlearn them you will never be able to learn them again. If you're thinking of removing any of those skills think twice; you will lose them forever. These skills have a "Cannot be relearned." warning in their skill description.