Lightsail Cave is a small-sized dungeon and only has one path from the beginning of the dungeon all the way to the final boss. It is unique compared to other dungeons in that it does have stairs leading to other floors though this does not make it difficult to navigate. The dungeon contains melee, magic, and ranged Wraiths. It also contains Wraiths that will freeze you constantly upon aggroing them, making it very difficult to move past them without killing them. There is a blue portal located next to the boss in the final room which will allow players to leave the dungeon.

You are not able to use wine to clear out any Wraiths.

There is only one boss in Lightsail Cave. 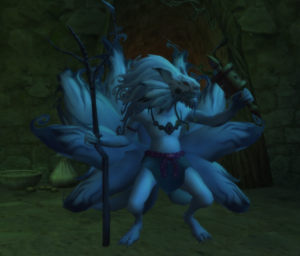 The Snowgrind Fox is a fox-humanoid Wraith that serves as the sole boss for this dungeon. It is located in the easternmost room of Lightsail Cave, hiding towards the back of the room and guarded by several Devil Pillars that you must defeat before you can face it. There is a blue portal located near it that will take players out of the dungeon when they are ready to leave.

The Snowgrind Fox primarily uses melee attacks, although after its health has been reduced a bit, it will use a strong water element attack on the tank.

One the boss reaches certain points of health, it will also do various AoE skills:

Towards the end of the battle, it will perform its "strongest attack", which will stun the tank for roughly 4 seconds.

This boss does not drop any items, coins, or Nuemas.