The Race that Disappeared[edit | edit source] 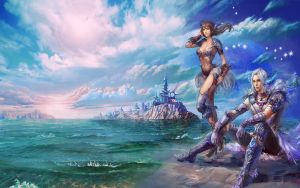 The City of Raging Tides.

The lands of Perfect World was home to the three races of Humans, Untamed, Winged Elves all of whom were the highest creations of the gods and were the most intelligent and spiritual of creatures. Together, they became the rulers of the World, sharing the glory of being the strongest living beings. Long had they forgotten that on the furthest ends of the ocean, a race of equal standing lived, seeking a way out of the endless bloodshed and voodoo; the Tideborn.

With the endless invasions of the Rancor Forces, the four major races guarded their homes and major cities fiercely. The entire ocean was to be defended by the Tideborn. In the fiercest of battles, the Rancor Forces focused their entire strength on the Tideborn, and the Tideborn couldn't withstand the onslaught. To protect the interest of the entire Perfect World, the heroes had to use the forbidden art of 'Dimensional Cataclysm'. The spell that was left behind before the gods went back to the Heavens, and because of the unorthodox usage of the five elemental sources, it could move the source of the world; thus the ancestors of the Tideborn banned their people from using this art. However, the time of inevitable consequences had come, and so all the Elders of the Tideborn garnered their power to cast the spell.

Indeed, the power of the forbidden spell was overwhelming, and it was as if the Heavens and earth opened up. Tidal waves overcame the Rancor Forces, and the Tideborn was victorious. However, there was an inescapable result: the Chief Elder (Abandoned Cloud) of the Tideborn passed away, his body being sapped of any energy by the spell. Because he died in the midst of casting the spell, it became uncontrollable, and wouldn't die out even after extinguishing the Rancor Forces entirely. Energy burst forth from the runes, creating an endless sea of separation between the Tideborn's territory and the rest of Perfect World that nobody could pass through. And on the side of the Tideborn, ferocious storms raged on, neverending. From then on, nobody from Perfect World heard of anything about the Tideborn. To the folks in Perfect World, beyond Dream Searching Port and the Dragon Palace, in the Southeastern direction, there was nothing but a ceaseless storm that even gods couldn't pass through. This became known as the Forbidden Sea. The storm wrapped the entire area, and nobody knew what happened within the storm. There was only the legend that after the bloody battle, the Tideborn sank into the bottom of the Forbidden Sea, bringing the City of Raging Tides with them. After the fated battle, the other races could finally breathe easier. Over the years, many human Wizards tried to pass through the Forbidden Sea to locate the Tideborn, but none succeeded. None until Grand Wizard Tensa's top disciple Soul Controller Saki. If not for this piece of destiny, the history of the Tideborn would not continue.

The Savior of the Tideborn[edit | edit source] 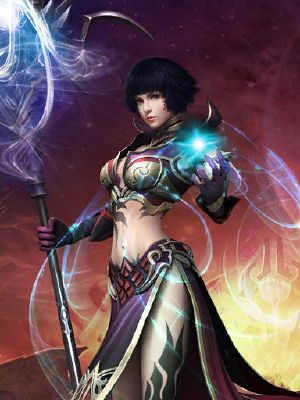 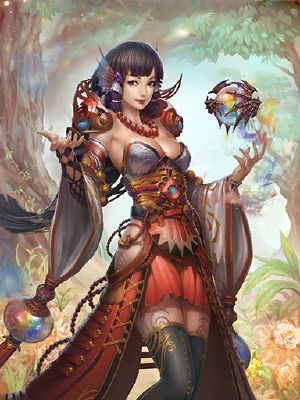 The Wizards believed in the power of the elements, and made it their lives' work to use their conscious will to manipulate the elements of Fire, Water and Earth. The most outstanding in the history of Humans was Grand Wizard Tensa, and she was also one of the greatest heroes in Perfect World. Soul Controller Saki was Tensa's last disciple. Because she was the most intelligent and studious, Saki was the apple of her master's eye. Through traveling and nonstop studies, Saki quickly grew to be the most powerful of Tensa's disciples, and was asked to study in the Demon and Immortal Worlds by the Wizards. In the fantastic Worlds, Saki became disillusioned, and questioned the Humans' belief in elemental magic. It turned out she had discovered the abandoned art of infusing one's own energy into others' bodies, and gaining control through such infusion. The method became known as Soul Manipulation later on. Saki began to study and scrutinize the art. However, she was exiled from Etherblade City for blaspheming of the Human beliefs, and was labeled a heretic, never to return. The exile happened at the most crucial point before a breakthrough in her studies.

Saki wandered the Perfect World for many years, battling with the Rancor Forces tirelessly. Although she was exiled before her important breakthrough, she could use part of the lost art effortlessly. Tensa told her through secretive ways that this art could help her pass through the Forbidden Sea, and if she could help to locate the disappeared Tideborn race, she could perhaps return to Etherblade. After receiving the secret message from her master, Saki quietly made her way to Dreamweaver Port and took cover, changing her name. Eight years she attempted to study the method of passing through the Forbidden Sea. Saki's efforts were not in vain and managed to pass through the Forbidden Sea, suffering excruciating and indescribable pain in the process. After which, she came to another world.

Soul Controller Saki came to the Tideborn just in time, because although they were free from the Rancor Forces, they had to continue fighting with another ancient race - the Nightspikes. Until the day she came, the feud had been going on for hundreds of years.

The Nightspikes race, once no match for the Tideborn resurfaced from the 'Five Sea Island Prisons', where they stayed hidden for many years, when the power of the Tideborn had become worn down by the Rancor Forces. Tideborn warriors guarded the City of Raging Tides with their lives, but were unable to protect their people outside of their capital. In desperation, a new method of fighting evolved from the old; The Tideborn traveled in very small groups, looking for singular targets, attacked with lightning speed, killed in a single blow and left as soon as the targets were down, vanishing like spirits. Thus were created the Assassins. The Tideborn became stronger, and took the advantage in the battle against the Nightspikes. The Tideborn shamans, whose standing began more and more to outweigh their effectiveness in the struggle, began to be treated with disdain by the traditional warriors and Assassins. There began an internal struggle for power within the Tideborn.

The Soul Manipulation magic that Saki brought with her gave power to an independent branch of combat power in the Tideborn - the Psychics. They tried many new innovations on the ancient art that Saki brought with her, such as using their underwater herbs in conjunction with Soul Manipulation, and through chanting. amplify or minimize the healing properties of said herbs. Years of modifying the art made the Psychics a formidable force in combat, and gained them respect from their fellow Tideborn. However, the Assassins saw them only as competition, a competition that nearly erupted into open violence, on the very night Saki passed away.

The Nightspikes infiltrated the City of Raging Tides that same night. Divided and unprepared, the defenders managed to drive back the invaders, but the battle had gone very badly. An emergency meeting with the Elders was assembled, and unanimously called for reconciliation of the Tideborn. They regrouped and struck back against the Nightspikes, succeeded in driving back the forces of their forces. The devastation served to remind the Tideborn of the danger their infighting had put them in.

After the reconstruction of their homeland, the combative forces of the Tideborn slowly grew in power once more. After many years, at the strongest they had ever been, the Tideborn clashed in a final battle, known as the Battle of Broken Dreams. The Heavens and earth changed colors; there were eerie clouds over the ocean, and the gods themselves joined the fray. After four days and four nights, Feng Loriel killed Turoho, the evil god of the Nightspikes, and the Nightspikes forces retreated. The long battle was finally at an end.

The Return of the Tideborn[edit | edit source] 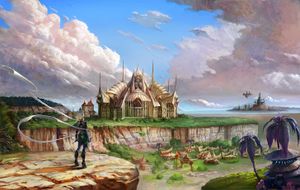 Tideborn Assassin looking at the City of Raging Tides in the distance.

Only the Forbidden Sea, with its explosive lightning and tidal waves, remained to disturb the peace. But the Forbidden Sea seemed an insurmountable problem. Feng Loriel was crowned the King of the Tideborn after the victory of the Battle of Broken Dreams. He devoted his entire life to trying to discover a way to break the seal over the Forbidden Sea, but to no avail. Finally, as he was about to pass on, in a moment of light, he understood and left his final words,'Three hundred years later, when the world's five elemental forces rearrange themselves, the power sealing the Forbidden Sea will be the weakest. At this time, with eighty of our priests reverse casting the 'Dimensional Cataclysm', this is the way the seal can be broken! The only way!'

Someday three hundred years later, on the Heaven Pedestal of the City of Raging Tides, A great huge rune was turning and roaring. At this time, near the Dreamweaver Port, some fishermen who were preparing to return from their fishing trips saw the color of the sky change.

"We gathered 80 of our most powerful priests many years ago to create a powerful magical array called the Dimensional Cataclysm to bring down the barriers. Several years later, the barrier of the oceans were finally broken, and the path to the mainland opened up." - Craftsman Betep.