Players in Perfect World have the opportunity to become married to one another. While married both players will have their significant other displayed above their own name as the wife or husband of the other partner. Other players who come across these two characters will know that they are a couple. In addition to this title, married couples will receive a bundle of gifts in celebration of their union. They will also gain the ability to manage each other's Homestead and gain access to daily Marriage Quests with which they can farm a variety of items including fashion and the ability to teleport to their spouse, though only useable in open world.

Marriage is only possible with a male and female character; same-sex marriage is not possible in the game. While it is a highly-requested feature for the game, it is unlikely to be introduced due to the game being developed in China, where laws may differ.

In order to get married, you must meet the following conditions:

Once both sides have completed the quest the current squad leader will then proceed to finalize the union by speaking to the Eldest Matchmaker one more time. The final part of the quest is also called "Matrimony" so at this point all you need to do is complete it is to have the Squad leader speak to the Matchmaker again to complete the quest.

After the marriage has been completed, you can speak to the Eldest Matchmaker to teleport you to the foyer. There, you can talk to the Wedding Usher and set a date and time for a Wedding Ceremony. The ceremony times are server times so pay attention. If you mistakenly choose the wrong time/date you will have to pay 3 million Silver Coins to cancel. Also keep in mind certain maintenances that may be planned in advance, such as Daylight Savings maintenances. If you do choose your wedding time to be around maintenance unknowingly, you can try sending a support ticket to be reimbursed but it is not guaranteed.

You can choose between the western style Wedding Chapel or the eastern style Phoenix Nest.

Player couples can do Marriage Quests each day once they are married and are at least level 30. Obtainable by being in a squad with your spouse, the squad leader will be able to start the quest at the Matchmaker Servant (523,655 ↑21). There are 7 different quests available, one for each day of the week. The quests award both players with experience, spirit, romance, and items that can be exchanged for fashion, tomes, and a unique teleportation skill that allows the player to teleport to their spouse.

Warning: leaving the squad or inviting another player will cause the quest to fail.

Married couples can earn Karma, also known as Romance, to earn rewards such as Homestead decorations and titles. The Couple Karma system can be accessed through the Public Relations menu at the bottom-right of their screen. This window will show the name of your current spouse, your Total Karma, Weekly Karma, and a checklist of activities you can do for the day to earn Karma. The Karma Tree can also be found in this window.

Karma can be earned through the following methods:

At the end of the week, on Sunday at midnight server time, the married couple's Karma earned for the week will be converted into Heart Seals at a 10:1 ratio. It will also be added to their Total Karma and their Weekly Karma will be cleared.

Every day, both players can pick up the Couple: Sweet Competition quest at the Matchmaker Servant in West Archosaur (523, 656). The quest requires the married couple to be in a squad together and kill a boss from a high-level dungeon. Other players can also join this squad.

The bosses that the couple can kill are as followed. The couple only needs to kill one of these bosses to complete the quest:

Upon completing the quest each player will gain 50 Romance for a total of 100 Romance, which will then be converted into Karma. 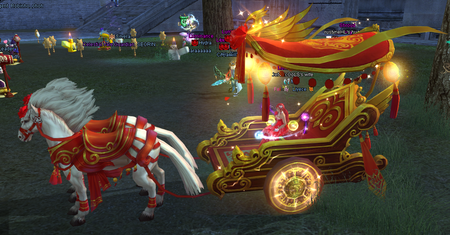 When a couple is married, they can earn the Goldwind Dew title by earning 10 Total Karma and then talking to the Matchmaker Servant in West Archosaur (523, 656).

The married couple can earn rewards after reaching a certain amount of Total Karma. As you reach each tier you can take a quest at the Matchmaker Servant to receive your rewards.

The Gilded Canopy is a 11m/s mount. 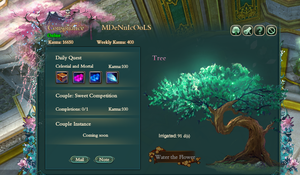 A Karma Tree in the "Tree" status.

The Karma Tree is a part of the Couple Karma system. It can be accessed through the Public Relations menu at the bottom-right of their screen. This window will show the status of the Karma Tree and the number of days it has been watered for. Married couples can water this tree once per day to help it grow from a seed to a fully blooming Karma Tree. To water the tree, open the Couple Karma interface and click on the "Water the Flower" button.

The Karma Tree evolves based on the number of days it has been watered:

Once the Plaque has been hung up, players will be able to view it by talking to the Karma Tree and selecting the "View Karma Tree" option. There, they will see the husband's and wife's name, and the time they hung up their Karma Plaque.

It is possible for a married couple to divorce if they do not wish to be married anymore. To divorce, only one of the players needs to initiate the process, and it costs 2,000,000 Silver Coins to do. The player can divorce by taking the "Divorce" quest at the Eldest Matchmaker in West Archosaur (523, 656). After talking to the Eldest Matchmaker again to confirm, the other player will receive a divorce notification. They can either choose to respond to it to be divorced immediately or ignore the notification. If the divorce notification is ignored then the player couple will be divorced after 24 hours. The player that initiated the divorce can also cancel it before the timer runs out.

Once a player couple is divorced they will not be able to use their Lover's Connection skill or use the Gold Ring and Diamond Ring to receive a blessing. The couple's Karma will also be cleared, and their Karma Tree will revert to a seed if it has been nurtured.

If a player couple divorces and changes their mind they must get married again using Bride and Groom Packs.