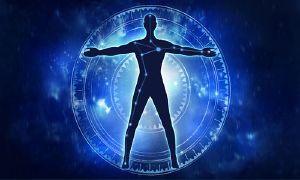 The Meridian system is a feature added in the Rising Call content update. It allows your character to gain additional stats by unlocking vessels or meridians. It is available to players level 40 and above.

The meridian system can be accessed from your Inventory by pressing the B key and clicking the character figure in the equipment window. 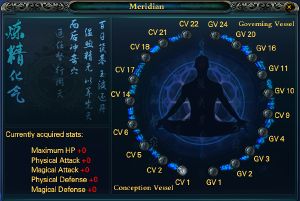 Upon opening the meridian window, the player will see an interface with several dimmed or fully lit orbs positioned around a meditating silhouette. Dimmed orbs are meridians that have not been unlocked, and fully lit orbs are meridians that have been unlocked. By default, no meridians are unlocked; all orbs will be dimmed except one slightly lit orb. To the bottom-left of the window will be the amount of stats acquired as a reward for unlocking meridians.

New meridians are unlocked at every level above 40 up until level 100 where the level requirement stops increasing. There are a total of 80 meridians that need to be unlocked to complete the meridian system.

To attempt unlocking a meridian, click on the slightly lit orb. Another window will pop up with a total of 48 unlit "gates". To attempt unlocking a meridian, the player will have to find a "Life Gate", which are hidden within the gates. The player will have to click on one of the gates to attempt to reveal this Life Gate. If the gate clicked is incorrect, then the player will have uncovered a "Death Gate", which will turn the gate red. If only 1 Life Gate needs to be found, then this will not reset the progress for unlocking the meridian. If the button clicked is correct, then a Life Gate will be uncovered and this gate will turn yellow. Once the player is successful in unlocking the meridian, the window will close, allowing them to proceed to the next meridian.

At the beginning, there will be many Life Gates hidden within the gates. The further the player progresses however, the less Life Gates there will be. Eventually as you complete the full circuit of the meridians, you will be able to unlock the center meridian, where 2 or even 3 Life Gates will have to be uncovered in a row; Death Gates will reset the progress for that meridian and the player will have to start unlocking that meridian from the beginning. There are four central meridians - Flame, Dark, Frost, and Light.

Mystical Pills can be acquired through the following methods:

Holy Pills can be acquired through the following methods:

Below are the maximum amount of stats that each class can get upon completing the meridian system.

The table below shows various data for each meridian to be unlocked, including the number of Life Gates per meridian, the amount needed to unlock the meridian, and more. It also includes the amount of stats that will be added upon unlocking each meridian. The amount you can get at a particular meridian is equal to the "% Max Stats" in the table below, multiplied by the maximum value of that stat in the table above.

In the table below, the last 3 columns show this value for the HP of AA classes (wizard, venomancer, cleric, psychic, mystic and stormbringer), LA classes (archer, assassin and duskblade), and HA classes (blademaster, barbarian, and seeker) respectively.