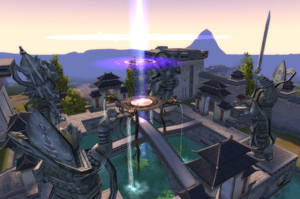 The capital of the Midlands, Archosaur.

The Midlands are the main location of Perfect World. Prior to the PWI Neverfall expansion the Midlands didn't have a name but received one after the world map expansion. Players that have finished their quests in the Celestial Vale will continue their adventures here.

Etherblade is one of the main Human settlements of the Midlands. Many young wizards, technicians, and blademasters have stepped out of its walls and into Perfect World on their journey to the great city of Archosaur. For many Humans, this is where their dreams begin.

The City of the Lost[edit | edit source]

Archaic buildings and bestial statues make up the city, home of the wild barbarians and the mysterious venomancers of the Untamed. Though these heroes have fought and died in many bloody battles, none have regretted it. Their true desire in war was peace, however, and now that they have achieved it in their homeland they seek to protect the stability and prosperity of all Perfect World.

The City of the Plume[edit | edit source]

The Winged Elves are noble and dignified people, flying high above Perfect World on brilliant feathered wings. Their people are skilled archers, powerful clerics, and edgerunners, their homes elegant and atmospheric, and their homeland full of forests and idyllic beauty. Beneath the canopy of the great tree lies the City of the Plume, the grand heart of their territory.

The three Barrier Islands are located at the southernmost edge of the Sea of Reality, across the Forbidden Sea. Ever since the Tideborn elders used the Dimensional Cataclysm ritual to destroy the Wraiths and push their islands further out to sea, it has been considered a land forsaken by the gods. But now their ruined city has been rebuilt, and these aquatic assassins and psychics are venturing out into Perfect World once more.

Tellus City is home to the Earthguard, warriors chosen by Radiance to protect Perfect World from the Wraiths. Though long buried beneath the surface of the earth, when the Wraiths once again threatened Perfect World these mystics and seekers emerged from their long slumber to do battle once more.

Many years ago, the Divine Child sent his children out of the Realm of Garrow and into Perfect World on a flying ship. Arriving on an island at the northern end of the Endless Sea, they turned their ship into a city named Dawnglory. The Nightshade who dwell here are dedicated to the defense of Perfect World, their duskblades and stormbringers trained to fight evil in all its forms.

The City of a Thousand Streams[edit | edit source]

The Gateway of All Worlds was discovered on a highland in the Midlands. The Elders of Perfect World met for the first time to discuss the creation of a great city to watch over the protect the Gateway of All Worlds. In the year 231, the construction of the City of a Thousand Streams and the Worldspire were completed.

When the gods created Perfect World, they shaped it based on the Primal World. However, some people believed that that somewhere beyond the known world was another land of fortunes and riches. A harbor was built on the Sea of Reality in the southeastern corner of the Midlands, and every year countless adventurers set out from there dreaming of finding a new land. After two thousand years, Dreamweaver Port had become a bustling city of trade and adventure. Though most people forgot about those who set sail dreaming of a new land, whenever the silhouette of of ships and sails appear over the ocean's horizon the citizens of Dreamweaver Port wonder where they've been and what exotic things they could be bringing back.