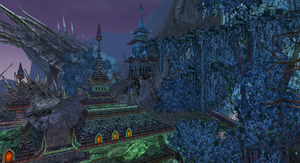 The Village of Greed in Momaganon.

When the gods fought over the mortals' faith, some were cast out of the Sacred world into the void. There they created their own realm, called Momaganon. After those events, Momaganon became the realm of the Celestial Demons. At the heart of this realm is a place called Abaddon, a tiny oasis in a desert of darkness where those who tire of conflict may find peace. 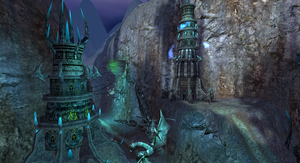 Even after the gods retreated to the Sacred World, they found that they had an inherent connection to their mortal children in the Primal World. The mortals' faith empowered the gods, and those with more worshippers became even stronger. As time went on, though, some gods disagreed with their fellows. They fought and were cast down into the abyssal void, abandoned by mortals and gods alike. This void was an unruly space that even Pan Gu had not touched. Powerful and twisted aberrations lurked in its eternal darkness. Nevertheless, the gods there were still able to find worshippers, and granted their followers the dark power of the void. These mortal wielders of such chaotic power were called Demons. Throughout history, Sages and Demons would find themselves intertwined as eternally opposing forces.