Mystic Summons are a feature exclusive to mystics that function similarly to the venomancer's battle pets. There are a total of five different summons available in the form of skills: Devil Chihyu, Storm Mistress, Salvation, Cragglord, and Voidbringer. Mystics can only have one of these summons out at a time, but can still use plants while having a summon out. Some summons will remain out until they are sacrificed or killed, while others can only be out for a limited amount of time. If a summon dies, the mystic will not have to revive it and can simply summon it again with a skill.

Previously four of these summons could only be learned through skill books acquired from quests, however these are no longer required. The final summon, Voidbringer, still requires a skill book to learn.

There are a few skills that mystics can learn to benefit or utilize their summons. Mystics will not be able to use the skill Energy Leech on their Cragglord summon. 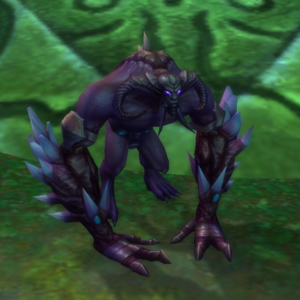 The Devil Chihyu is the first summon a mystic will learn. It aids mystics in dealing single target physical damage and comes equipped with a stun skill. Using Energy Leech with Devil Chihyu increases your physical defense and critical rate for 20 seconds.

Mystics can learn the skill to summon a Devil Chihyu upon reaching level 7, and can upgrade the skill to level 10 once they reach level 52. Upon learning either the demon or sage version of the Devil Chihyu summoning skill, it will learn a third skill called "Boost" which increases its attack for 20 seconds.

Devil Chihyus are creatures created from Mystic Priest Ryao's power to help young mystics learn about summons and to learn to depend on themselves in the future.

The Devil Chihyu starts out with two skills named Folding Strike and Skull Slap. These skills are leveled up as the Devil Chihyu skill is leveled. When it is upgraded to sage or demon version or higher, it will learn its third skill named Boost.

The Devil Chihyu will use its own Chi (also known as Mana) for skills. It will naturally regenerate Chi over time, and can also gain Chi from the mystic's Transference skill. 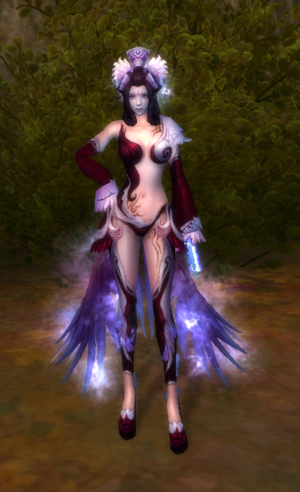 The Storm Mistress is the second summon a mystic will learn. She aids mystics in dealing extra elemental damage through the use of metal skills for both single-target and multi-target attacks. Using Energy Leech with the Storm Mistress increases your magic defense and magic attack for 20 seconds.

Mystics learn the skill to summon a Storm Mistress upon reaching level 23 and the Aware of Principle cultivation, and can upgrade the skill to level 10 once they reach level 68. Upon learning either the demon or sage version of the Storm Mistress, she will learn a third skill called "Moonshade" which can seal a single target.

A story from Ritualist Septus tells a tale of when he was a young mystic, he had just entered a covenant with the thousand-year-old Mystic, Storm Mistress. He had passed all of her trials and was well on his way to greatness. However, in one of his final battles, a ring that signified the connection between the two, the Thunder Stone Ring, shattered into five pieces and were scattered across the Decaying Woods. Since then, Ritualist Septus has been kept back from completing his training, as Storm Mistress saw his failure as an unforgivable mistake. To this day, he wonders if someone found all the pieces of his ring and brought it to her, what would she say then?

The Storm Mistress starts out with two skills named Luna Blade and Hush. These skills are leveled up as the Storm Mistress skill is leveled. When the skill is upgraded to the sage or demon version, she will learn her third skill named Moonshade.

The Storm Mistress will use her own Chi (also known as Mana) for skills. When she runs out of Chi she will use melee attacks instead of ranged magic attacks by default. She will naturally regenerate Chi over time, and can also gain Chi from the mystic's Transference skill. 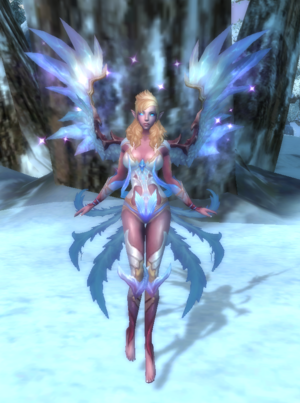 Salvation is the third summon a mystic will learn. She comes in handy for giving mystics extra support through the use of her shields to protect you and allies from damage. She does not have any offensive skills to use against enemies, so she is not suitable for combat. Using Energy Leech with Salvation grants you a shield and gives a minor version of Falling Petals. This lasts for 30 seconds or until significant enough damage is dealt to the Mystic.

Mystics learn the skill to summon a Salvation upon reaching level 33 and the Aware of Discord cultivation, and can upgrade the skill to level 10 once they reach level 78. Upon learning either the demon or sage version of Salvation, she will learn a third skill called "Warp Shield" which shields all nearby squad members.

Old Elven legends tell a tale of one of their Elven Goddess, named Azure, Goddess of life and daughter of Pan Gu, being sealed in a Runestone Plinth after protecting her people from a terrible disaster.

Beckenast the First Mage hopes that you can revive the Elven Goddess spirit to help in the coming battles against the Wraiths.

Salvation starts out with two skills named Aegis Sphere and Martyrdom. These skills are leveled up as the Salvation skill is leveled. When the skill is upgraded to the sage or demon version, she will learn her third skill named Warp Shield.

Salvation will use her own Chi (also known as Mana) for skills. When attacking enemies she will attempt to use her skills on them, but will not be effective as they are supportive skills. When she runs out of Chi she will use melee attacks instead of attempting to use her supportive skills by default. She will naturally regenerate Chi over time, and can also gain Chi from the mystic's Transference skill. 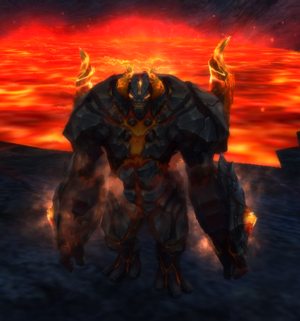 The Cragglord is the fourth summon a mystic will learn. It has higher stats than the first three summons and allows Mystics to deal a significant amount of Fire damage to all nearby enemies, but costs 2 sparks and only lasts for 20-23 seconds. There are no benefits to using Energy Leech with Cragglord.

Mystics learn the skill to summon a Cragglord upon reaching level 59 and the Transcendent cultivation, and can upgrade the skill to level 10 once they reach level 86. Learning the demon or sage version of this skill does not teach the Cragglord a third skill.

Though once mortal, Cragglord is a fierce flame god who brought disaster to the Earthguards. Many have fallen victim and perished to his strength while trying to gain his favor. The strongest Earthguard forces battled him once, but only managed to seal him away at the cost of many lives. The Cragglord has been locked inside a cairn in the Valley of Disaster for nearly a thousand years. It is now up to you to release him and bring him under your control. You must find the sword known as "Red Lotus" in the Restless Remnants, which has the power to break the seal of the Cairn of Fire, and release the Cragglord. Then you must defeat him and bring him to your control.

The Cragglord only has two skills, named Eruption and Cometfall. These skills are leveled up as the Cragglord skill is leveled. Unlike other summons, the Cragglord will not learn a third skill upon being upgraded to sage or demon.

While the Cragglord does have Chi (also known as Mana), it does not use it for either of its skills. 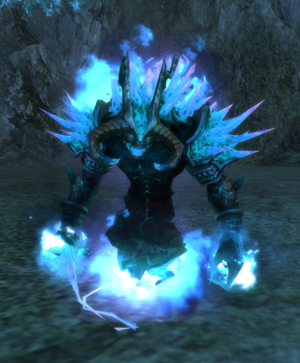 The Voidbringer is the fifth and final summon a mystic will learn, and is an ultimate skill. It is the mystic's most effective summon with higher stats than any other summons, but only lasts for 15 to 30 seconds. Most damage that is dealt to the mystic will be redirected to the Voidbringer. Upon the Voidbringer's death, it will explode, dealing a significant amount of wood damage to all nearby enemies. Using Energy Leech with your Voidbringer will increase your magic attack, physical and magic defenses, and critical hit rate for 20 seconds.

Mystics can learn the skill to summon a Voidbringer upon reaching level 100 and the Aware of Vacuity cultivation, and can level it up once. Both levels of the skill require skill books.

How to Get a Voidbringer[edit | edit source]

In order to obtain your Voidbringer, you must craft the skill books using Elysian Seals, which can be acquired from Homestead collection quests. Players can get a Homestead at level 70 and begin to work on the materials for this skill right away.

To get Elysian Seals, enter your Homestead, click on the Q button in the top left of the screen to open the Homestead quest window, and pick up a Collection quest from the Collection tab. These Collection quests will require the player to craft certain Homestead decorations. Once you have the required decorations, open the Homestead quest window again, go to the Complete tab, click on the quest, and then click the "Completing quests" button to receive your rewards which will include an Elysian Seal.

There is only a basic summoning skill, which has only 2 levels. These skills can be learned by acquiring Elysian Seals from your Homestead.

To cast the summoning skill you must have Subsiding Dirt, which can be acquired from Homestead collection quests.