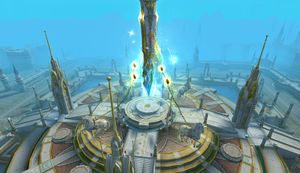 The Neverfall Quest Chain is a series of quest chains that take place in the Western Steppes. It is one of the longest series of quest chains in the game. It focuses on the story of why the continent was separated from the rest of Perfect World for 2000 years, and what has occurred since then. The quest chains are essential to complete in order to unlock Glyph slots, Dawnlight Halls, and the Chaotic Soul and Celestial Saint cultivations. 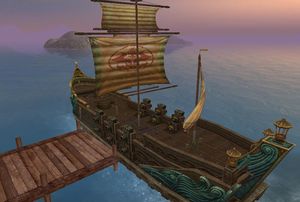 The Dream Seeker leaves every 5 minutes or after 36 passengers have boarded the ship. When boarding the ship, the player may need to fly as the dock itself has gaps the player can fall through. To get on the ship, double-click on the ship where the cursor changes into a horse and carriage. A window will appear allowing the player to select a seat by clicking on the vehicle positions, and then clicking the Enter button. The player will be teleported on the ship where they can eject from the ship by clicking the curved arrow button in the middle of the screen.

Upon entering the Western Steppes, a popup will appear mentioning the Arigora Colosseum. This quest is not related to the quest chain at all and is instead an introduction to the Arigora Colosseum, a cross-server PvP arena. The player will also have access to the Swords to Plowshares daily quest.

There are a total of 5 different quest chains, each with their own set of requirements. They must be completed in order.