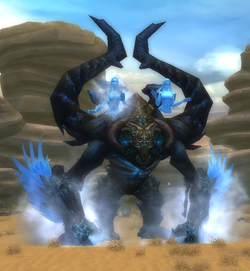 Naga Basara, one of the most powerful Nightmares.

The Nightmares are mysterious monsters that live in the Quicksand Maze in the Midlands. They are believed to be the twisted spirits of those who committed unforgivable sins in their life. They can invade the dreams of others to prey upon their minds and use their lust for power to drive them to even more despicable deeds.

These Nightmares had once manipulated the Divine Furies' wicked descendants into a riot to attack the Divine Children when they were at their weakest. This lead to the departure of the Divine Children from Perfect world, and the Nightshades coming to the Midlands. In the current times, players can fight the Nightmares inside Quicksand Maze to stop them from invading people's dreams and causing trouble.

Nightmares don't have any specific physical traits. They take many horrific forms and shapes to instill fear in the minds of those that dare to fight them.