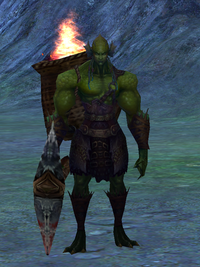 The Nightspikes are an ancient aquatic race that live on Shattered Cloud Island in the Midlands. It is unknown whether they are the original inhabitants of the Barrier Islands, as the Tideborn had been relocated there by the gods. The two races did not get along and the Nightspikes were eventually defeated by the Tideborn. They stayed hidden for many years, but resurfaced again when the power of the Tideborn had become worn down after their battles against the Wraiths.

The Nightspikes fought the Tideborn for many years. They infiltrated the City of Raging Tides and assaulted the Tideborn during their internal strife. However, the Nightspikes were ultimately defeated in the Battle of Broken Dreams. The Tideborn had the help of Soul Controller Saki who contributed to the rise of the Psychics. In the final battle, the Tideborn leader Feng Loriel killed the Nightspike warchief and lead the Tideborn to victory. The defeated leader of the Nightspikes eventually became a Wraith Lord named Caeya and conspired together with the Shoka King in Primal World. In the current times, players can fight the Nightspikes in the Public Quest of the Shattered Cloud Island.

The Nightspikes have a humanoid appearance with fin-like ears. Their skin is made of blue, purple or green scales. Their hands and feet have sharp claws. Many of them have a membrane between their fingers and their toes to allow them better movement underwater. They don't appear to posses any special forms like the Tideborn's tidal form.