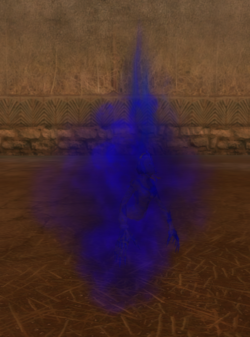 A spirit that can be absorbed for Nuema Orbs.

Nuemas can be accessed by opening the War Avatar System through your Inventory by pressing the B key.

In the War Avatar window, to the left of the currently viewed War Avatar Card is the Nuema. Each War Avatar slot type has a Nuema, meaning there are 6 different types of Nuemas - Destroyer, Battle, Longevity, Durability, Soulprime, and Lifeprime.

The stats that can be increased for each type of Nuema are the same as they are for War Avatar Cards:

Nuema levels are referred to as tiers. The maximum tier is currently 8. Each tier will grant the player with permanent stat boosts that increase with each tier. By default, your Nuema tiers will be 0 and will not add any stats until it has been leveled. Each tier has a level requirement.

Each tier of Nuema grants the player with permanent stat boosts. The amount of stats for each tier is different for each class, depending on their primary armor type with the exception of assassins, who are granted lower attack stats than archers and duskblades. Note that War Avatar Cards will not affect these stat bonuses and vice versa.

To level up Nuema tiers, the player must absorb Nuema Orbs. There are Nuema Orbs for each type of tier - Destroyer, Battle, Longevity, Durability, Soulprime, and Lifeprime. There are also two different types of orbs - Origin Orbs and Essence Orbs. Origin Orbs are the more common type of orb, while Essence Orbs are rarer and give three times the EXP of an Origin Orb.

There are multiple ways to obtain Nuema Orbs:

Unlike Nuema tiers themselves, Nuema Orbs do not have a level requirement, so they can be consumed at any level. There is no limit to how many Nuema Orbs you can consume per week, however you will not be able to use any more orbs of a certain type if your corresponding Nuema tier is at its maximum level.

Players can get Nuema Orbs by killing certain bosses in dungeons. After the boss has died, a spirit will appear for a short time which can be absorbed for a Nuema Orb. It is only available for 1 minute after it drops from a boss. The channeling time for absorbing a Nuema Orn from a spirit is random between 10 to 20 seconds. Multiple players can attempt to absorb the orb, however only one player will actually successfully absorb it. For this reason is it more beneficial to solo bosses to farm orbs. The type of Nuema Orb absorbed will be random, and has a small chance of being an Essence Orb instead of an Origin Orb.

Most bosses will only drop 1 spirit, with the exception of bosses in Undercurrent Hall, which drop 10 spirits instead, allowing for an entire squad of players to be able to absorb Nuema Orbs. Usually up to 2 can be absorbed before the spirits disappear. The amount of spirits that appear is not affected by 2x drop events.

The bosses that can be killed for Nuema Orbs are listed below. Bosses that can drop multiple tiers of Nuemas will only drop one of them at random. Each day only some of these bosses will drop Nuema Orbs. This can be checked by opening the War Avatar window from your Inventory (Default: B) and clicking the Nuema button in the bottom-left corner of the window. You can also view your remaining Nuema absorptions in the same window. Up to 20 Nuema Orbs can be absorbed per week from boss drops, with the limit resetting on Saturdays at midnight server time.

When starting out with leveling lower Nuema tiers, Qingzi from Hall of Deception is a good candidate to farm as the dungeon is the shortest of all lower level dungeons. Once your Nuema tiers begin to get higher, other bosses to farm include ones from the Valley of Disaster, as usually multiple bosses from there are selected to drop Nuema Orbs.

For other dungeons such as Secret Frostcover Grounds it is important to consider the distance to reach certain bosses. For example, The Myriadtail Wyvern may take a long time to reach, along with Rankar depending on where he is currently located, so Fushma would be a better boss to farm as he is closer to the entrance.

When your Nuema tiers begin to reach higher levels, Hallucinatory Trench is a good candidate for farming on certain days when Stygean Quartermaster, Hooli the Black, and Bloodlusted Loon are all selected bosses to drop Nuema Orbs due to the short distance between each boss. Undercurrent Hall is also a good source for Nuema Orb farming at higher tiers however it does require a squad.