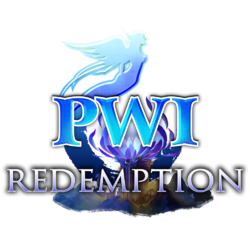 PWI Redemption is the thirteenth expansion for Perfect World International. It was first mentioned on June 25th, 2018 but not officially announced until July 29th, 2018. The expansion was released on September 19th, 2018. The main features for the expansion included the ability refine Tomes, a slight overhaul to the Tome crafting system, a Bestiary, a new area in the Western Steppes, a new Boundary named Royal Sky, Advanced Engraving, and a Mysterious Merchant that sells premium items.

The expansion was first mentioned through a news post on June 25th, 2018, which notified players of some of the upcoming changes coming to the game.[1] These changes would involve adjustments in item rewards affecting Flowsilver Palace Judgment Mode and Icebound Underworld, along with adjustments made to grades of shards. No other information on the expansion was provided.

A teaser trailer was uploaded to the PWIGame YouTube Channel on July 2nd, 2018. The trailer showed upcoming areas in the Western Steppes, along with a brief look at some of the graphics updates coming to the game. The name of the expansion was not announced however the release date was set for Fall 2018.

The first spotlight for the expansion came on July 29th, 2018.[2] This spotlight revealed a refining system for Tomes; this system would be separate from regular equipment refining and involved a mostly different set of items which can only be purchased through the Boutique. A chance to upgrading lower-leveled Tomes which involves decomposing them for an item to use for crafting. These changes would affect level 1 to 5 Tomes.

The second spotlight for the expansion was posted on August 5th, 2018.[3] It announced the release of an in-game Bestiary, which would show information on boss strategy to better help players defeat them. The Bestiary would be in its initial stages, only covering bosses from dungeons such as Icebound Underworld, Dawnlight Halls, and Uncharted Paradise. The Bestiary is also built in with a message board, allowing players to give further advice not mentioned within the Bestiary.

The third spotlight was unveiled on August 12th, 2018.[4] A new area to the north in the Western Steppes was revealed, with several images of the areas shown. A new Boundary, Royal Sky, was also revealed. The post also made mentions of new Historical Phases and new quests.

On August 19th, 2018, two news posts were released: a Treasure System update[5], and a feature spotlight for the Royal Sky Boundary.[6] The Treasure System would see a new mount, new flyers, and new fashion. Two new items were also announced - a genie with higher starting stats, a new starter skill, and a guarantee to have maximum Lucky Points; and Spirit Chisels, a new type of engraving item used for advanced engraving. The feature spotlight made mentions of the Royal Sky Quest Chain and also announced Sacred Spirits, a type of monster found in the Primal World and the Western Steppes designed to grant vitae for killing them.

The fifth spotlight was posted on August 26th, 2018.[7] The spotlight announced a new NPC, the Mysterious Merchant (not to be confused with the Mysterious Merchant that exchanges Mysterious Chips). This merchant has a 70% chance to appear when completing Uncharted Paradise in Deicide Mode, or when completing Dawnlight Halls on either Judgment Mode or Deicide Mode. The merchant offers items such as Glyph Packs and materials for Dragonbreath Weapons, purchasable either using coins or gold. There is also a limit to how many of each item can be bought.

The sixth and final feature spotlight was unveiled on August 29th, 2018.[8] An advanced engraving option was revealed which uses Spirit Chisels, a new item seemingly obtainable via the Treasure System. No details on the name of the expansion nor its release date were revealed in this feature spotlight, or in previous feature spotlights.

The name of the expansion, Redemption, along with its official logo was revealed on PWI's Facebook page on September 12th, 2018.[9] The release date was also announced to be the following week on September 19th, 2018.

The January 2019 Content Update is a content update for PWI Redemption. It had no official announcement, and was officially released on January 9th, 2019. Some features added to the game with the update include a new Twilight Temple dungeon named Twilight Temple Revisited, Twilight Warsoul Gear, Twilight Souls which can be imbued into Twilight Warsoul Gear, and the Warsoul Repository which saves set bonuses from equipment such as Rank 9 (Fourth Cast) to use in place of other set bonuses.

There were no news releases prior to this content update.