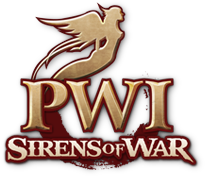 Sirens of War is the sixth expansion for Perfect World International. It was officially announced on November 7th, 2012 and released on November 14th, 2012. The main features included a new event called Nation Wars.

Now that the forces of the Dark Lord, Jian'rin, have spilled into Perfect World, the world has been set ablaze. Lines have been drawn and forces have mobilized to determine supremacy in this new age.

Amidst the chaos, four nations have emerged with the intent of wresting control for dominance. The nations of Frost, Flame, Light, and Darkness are stuck in deadlock and will require the aid of warriors such as yourself to push forward with their plans.

Do you have what it takes to survive?

A Perfect World At War
Four leaders of distant lands have come to Perfect World, seeing new opportunities that arose from the chaos sewn by the Dark Lord, Jian'rin. These leaders have come bringing war, strife, and endless fighting; but they also have brought with them opportunities for glory, honor, and rich rewards. They have sought out the strongest warriors of Perfect World to fight on their behalves in exchange for power and glory. Their desires and designs remain secret to the soldiers and citizens of Perfect World, but the battles will rage on deep into the night, and the call of the Sirens must be heeded!

The expansion was officially announced through a news post made on November 7th, 2012.[1] It revealed a few of the new features coming to the game, including the new Nation Wars event, revamped skills, new weapons and equipment, and new quests. A teaser site was also launched which can only be accessed through internet archives[2]. The site included the aforementioned information from the news post as well as screenshots and a cinematic trailer. Some screenshots showed gear that was later released as Rank 9 (Fourth Cast) equipment. It also included a launch giveaway of a Warrior Crusade Order for players as well as an entry into their sweepstakes giveaway for a customized Andrea gaming headset for US residents.

On November 9th, 2012 (re-posted on November 30th, 2012) a news post was released which showcased Nation Wars.[3] The event would be available on Fridays and Sundays from 8:20pm to 10:20pm server time for players level 60 and above. Players would be assigned to one of the four nations - Frost, Flame, Light, or Dark. Participants would be awarded with Military coins, now named Supply Tokens, depending on their nation's success and their contributions to each battle. The Nation Wars strategy map was also revealed, as well as the mechanics of the battlefield now known as Capture the Flag.

On November 14th, 2012 (re-posted on November 30th, 2012) a news post was made announcing the release of the expansion.[4] This news post included a new gameplay trailer and links to patch notes posts and previous news posts. It also announced a 2x experience/drops/spirit event for the next 3 weeks.

Dawn of Spring is the first content update for PWI Sirens of War. It was officially announced and released on the same day, March 20th, 2013. Some features for the content update included upgraded shapeshifting forms for venomancers and barbarians, changes to Nation Wars, a new upgrade for Warsoul Weapons, and the addition of Jolly Old Jones quests.

A news post was made on March 20th, 2013 announcing the release of the Dawn of Spring content update.[5] The post highlighted some of the main features for the update, including a map expansion for Nation Wars, the ability to upgrade Warsoul Weapons, Jolly Old Jones quests for players to earn coins, the Spirit Fox Form for venomancers, and the Panda Form for barbarians.

On the same day, a weekly sales news post was made.[6] This news post showcased the Nether Essence required for the new venomancer and barbarian forms, as well as a new feature called Gear Signature Inks which allowed players to add a custom message on their equipment.

New search function for the Boutique