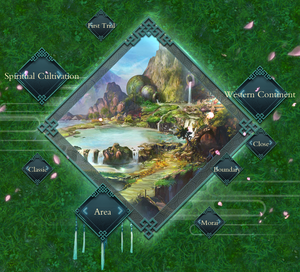 The Perfect World Anecdote is an interface that contains several important quest lines. It shows individual quests and will guide players if they have not completed certain quest lines, or it will show stories of the player's past experiences if they have completed a quest line. Completing a certain amount of quest lines will reward the player with exclusive titles.

The Perfect World Anecdote can be accessed by clicking on the scroll icon at the bottom-right of the screen and then clicking on the white book icon. Players can then click on the diamonds to enter the main anecdote interface which lists quest chains and their quests.

There are titles that can be acquired by completing certain quest chains.

All First Trial quests are a part of the Celestial Vale Quest Chain. The quest chain is available from a character's creation at level 1, and can be completed at any level. There are a total of 48 quests. Completing the First Trial quests will award the player with 1 Insight Point.

Spiritual Cultivation quests do not award any Insight Points. Quest chains will be shown differently depending on whether the player has chosen to go down the sage or the demon path.

Completing the Classic quests will award the player with 28 Insight Points.

Area quests are not particularly quest chains, but are quests that take place in certain areas on the map. Completing the Area quests will award the player with 23 Insight Points.