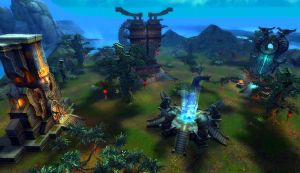 Kirin Town, the starting town of the Primal World.

The Primal World is an area available for players that are Reawakening 1 and level 90+. In Primal World players can raise their Boundary levels through the Primal Quest Chain and farm a variety of skills. It is also home to a number of dungeons, two of which are used for farming high level equipment. 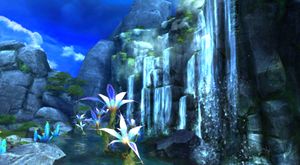 Scenery in the Primal World.

Primal World is the original world created by the gods. It was once destroyed during the Sea of Blood Disaster caused by the war of the gods. Upon realizing what they had done, the gods used their powers to create a new and better world that was later known as Perfect World. The gods took their favorite people in Perfect World, but many were left behind and the original world was abandoned.

The forsaken world became known as the Primal World. In the current times, Lord Tyrant has taken over the Primal World, exploiting tribes, stealing their resources and corrupting its inhabitants. In the meantime, the vicious race known as the Shoka are lurking in the waters near Kirin Town. Players can help Light Emperor Alexander unite the tribes of Primal World and fight against Lord Tyrant, the Luneskans and the Shoka.

Players can enter the Primal World at Reawakening 1 Level 90 and above.

Primal World has a lot of daily quests that reward players with Vitae to level up their Boundary levels, which are a requirement for entering specific dungeons, accessing other areas, learning new class skills, passive skills and increasing the overall power of the character. Primal World has two modes: regular mode and story mode.

Normal mode is the regular map of Primal World. Here players can do the following quests:

Story mode is a copy of Primal World, but has a different set of NPCs and quests. To enter or exit this mode players can speak to one of these NPCs:

In story mode players can do the following quests: