From PWpedia
(Redirected from Quicksand Maze)
Jump to: navigation, search

Quicksand Maze is a randomly-generated dungeon that was introduced in the Eclipse expansion. The higher level version of the dungeon is available to players that are level 100+ with a boundary level of Mirage Sky X or higher. The dungeon is used for farming materials for the second stage of Rank 8 gear otherwise known as R8RR, R8R, or R8R2 gear.

After entering you can pick up a daily quest "Whirling Sands (Daily Quest)" at Dreamspace NPC which gives you random R8rr materials when completed. Dreamspace also offer you a quest "Bloodglass Mirror" which reveals the dungeon map structure for 4 hours.The squad leader can start the dungeon by talking to Dreamspace when everybody is inside. You need minimum of 7 squad members to start the dungeon. 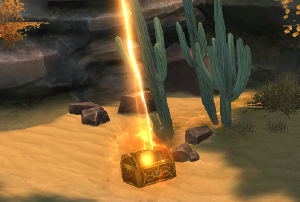 Over time players have discovered tricks to find the "true path" to the final boss, thus mostly avoiding dead ends.
It is rumored that the true path are hidden and that dead ends open up new paths. This is not true. Assuming you actually know the way, you'll never have to turn around.

Finding a gold chest means you are going the right way. These chests only spawn in rooms that are part of the road to the bosses.
Please notice Golden chests can spawn anywhere in the room, so if you find a chest in a room that have multiple paths, just because the chest is closer to one of the paths it does not mean that its the right way. 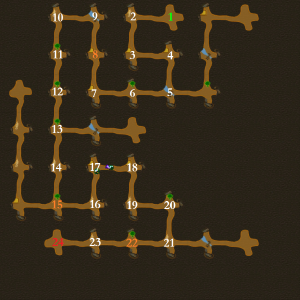 The dungeon is randomly generated, but not entirely. By counting every room you go through you can often figure out where to go, or at least know when you have to turn around.

You will encounter each standard boss every 7 rooms.

For example, if you get to room 6 but there is two ways to go, we know the next boss will be in room 8, which means if you do not encounter the boss in 2 rooms ahead, then you can turn around without a worry.

Having a Bloodglass Mirror in your inventory lets you see the whole maze, however it does not show you where the bosses are. The Mirror can be used in multiple Quicksand Maze dungeons as long it lasts (4 hours). You get the Mirror at the entrance of the dungeon by taking the quest "Bloodglass Mirror" which requires a Bloodglass Shard. Shards could originally only be picked up from Dead End chests inside the dungeon, but now it can also be bought for 3 Lucky Coins at Assistant Wang Tsai in Archosaur.

Dead End paths can be anywhere between 1 room to 8 rooms (not confirmed) long.
At the Dead End, you will find a jumping chest. Digging the chest will grant you a Bloodglass Shard (nontradeable), and have a small chance to spawn "Quicksand Bandit", which will drop 10 materials and have the highest rate of all bosses and mobs to drop rare r8rr materials, such as Garan stones and Kunwoo Blades.

If you have a Bloodglass Mirror activated, it is recommended to clear Dead Ends you are able to see that are only 1 room long, to get more shards and a chance of getting bandits. 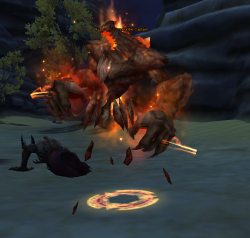 Red version of the "1Hit" Captains.

On the way to the bosses, you will encounter a lot of monsters. The majority of monsters are in groups and each group will have one captain, though sometimes two. Captains need to be your main focus. Each captain will have a different skill. If the captain can be stunned, this means the captain will also restore health each time he casts his skill. Exceptions are the captains with healing skills, these captains cannot be stunned. Therefore, stun locking classes are recommended to have in squad, especially if you are low on damage in your squad, to stop the captains from using their skills thus making the captains unable to heal themselves. Captain encounter is random.

For the captains that spawn pools, you can climb the rocks or the walls and the pools will be unable to spawn on you. 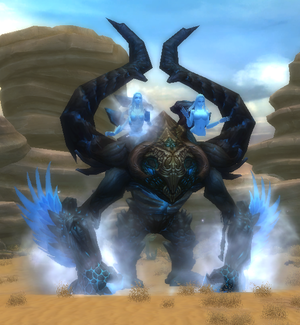 One of the final boss possibilities: Naga Basara.

You will encounter 3 standard bosses and 1 final bosses. Bosses will only spawn if you have killed enough captains and monsters. Check your quest log to see kill count.

You can see the boss mechanics by watching this video: Quicksand Maze Guide. 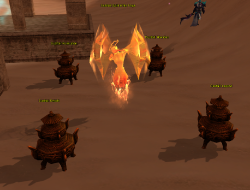 Outside the dungeon, all forges to the right (near banker) are for R8rr. At the Dustfall:Legend forge you can trade your untrade-able materials into a blue trade-able version (with a fee). It is free to transfer them back to untrade-able.

You can take a shortcut to upgrading your R8r to R8rr by using Dustfall Relic. You need 3 per armor piece and 6 for a weapon. Dustfall Relic can be obtained by chance packs or bought from other players. Re-rolling armor and weapons for different stats still require R8rr materials.

You don't need to be near the boss when he dies to get quest credit, however you need to be alive.