Quicksand Maze is a randomly-generated dungeon that was introduced in the Eclipse expansion. The lower level version of the dungeon is available to players that are level 50+ with a cultivation of Aware of Discord or higher. The dungeon is used for farming materials for low level gear (see forges to the left side of entrance) and recasting Morai gear. These types of gear usually offer a good amount of Slaying and Warding Level stats.

To enter the instance you talk to the Thunderdrum NPC at the entrance. Unlike the high level version of Quicksand Maze, this instance is free to enter as many times you want as long you meet the level and Cultivation requirements. You need minimum 2 people in the instance to start.

There are four different level ranges or modes, each giving different rewards:

You need to be minimum level 50 to enter. The level range or mode of the instance is dependent on the squad leader's level, so if you have a squad of 3 with following levels; level 62, level 79 (squad leader), and level 105, then you will be in the mode for level Lv65-79.

The first boss will be in room 6 counting the room you started from. The final boss can be found in either room 12, 13, 14, or 15 (confirmation needed for 11). You can view the map structure if you have a "Bloodglass Mirror" activated. You can take the quest for this at the entrance inside the dungeon. You will need a Bloodglass Shard which can be obtained at dead ends in Quicksand Maze (Level 100+) or be bought for 3 Lucky Coins at Assistant Wang Tsai in Archosaur.

At each dead end, you will find an "Original Force Guardian" monster and killing it will drop an Original Force Key. You can use the key at the last boss.

On the way to the bosses, you will encounter a lot of monsters. The majority of monsters are in groups and each group will have one captain, though sometimes two. Captains need to be your main focus. Each captain will have a different skill. Captain encounter is random.

You will encounter a total of two bosses. 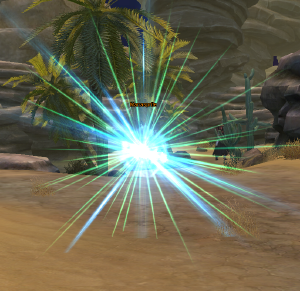 After killing each boss a Manasprite will spawn. This is the kill required for the quests. Make sure everybody is alive and nearby before you kill it.

At the final boss you are able to activate Magical Surge and Source of Force by using an Original Force Key. Each activation costs one key.

When the boss is buffing himself to be immune to for example water and fire, he can be damaged with wood. Players that do not deal wood damage must stay in the wood pool to gain a wood damage buff. Skills with another element (earth/metal/fire/water) won't work, it has to be physical attacks (if you are for example a Wizard, you have to auto attack the boss)

In the same way, when he is immune to fire and wood, he must be damaged with water. Players that do not deal water damage must stay in the water pool to gain a water damage buff. Skills with another element won't work here either.

If you have trouble switching between the pillars, get either 3 red or 3 blue pillars, then avoid killing the pillars (do not use AOE attacks) and just wait out his immunity. 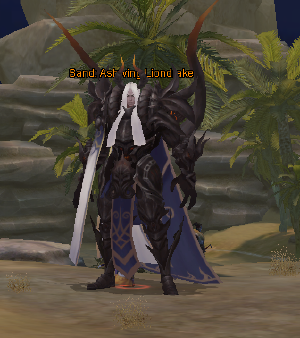 Abilities: Reduces max HP
Around 50% hp: Transforms into a purple dragon (glitched appearance), pulls players in air and reels in.

Lord of the Labyrinth[edit | edit source] 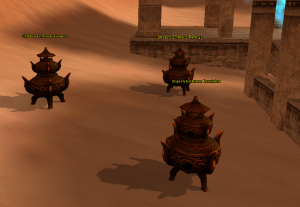 People that are in the same level range as the dungeon level range will be able to pick up a daily quest at the NPC Dreamspace inside. If it's the player's first time in the dungeon in this range, they will also receive a one-time quest for additional rewards. People that are Level 95+ regardless of the instances level range, can also pick up a quest as long they have Immolation Orders. This quest will give an option to choose between Skypool Scriptures and Earthless Tomes upon completing. Amount depended on instance level.

Items dropped from the instance are the "dim" version. They are trade-able but disappear if you leave the instance. Right click or double click them before you leave. The materials will become untrade-able.

Skypool Scriptures and Earthbless Tomes can also be obtained as a chance reward from Endless Universe.

The forges to craft gear can be found on the left side of the Quicksand Maze entrance.

Manasprite has a chance of dropping Dim Ancient Transcript.

Manasprite has a chance of dropping Dim Original Lore. 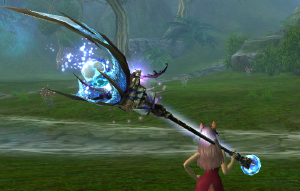 If you have plenty of Influence, you can buy as many Immolation Orders you wish for 60 influence from any Order. It requires 6000 Prestige.