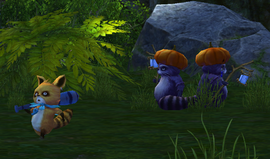 Raccoons Fighters and Warriors patrolling outside the Raccoon villages.

The Raccoons possess an innate ability to sense and change the flow of life energy that suffuses Primal World. This unique ability was eventually exploited by Lord Tyrant who forced the Raccoons to help him under the threats of the destroying the Raccoon villages should the Raccoons refuse to comply. Lord Tyrant's evil scheme eventually caused the separation of the Raccoons, but players can help rebuilt their relationships through the Raccoon Alliance Pact.

The Raccoons play an important role in the quest line for Arcane Sky and Mirage Sky when players will seek their alliance to help Emperor Alexander defeat Lord Tyrant. The Bamboo Raccoon Chief is initially too reluctant to trust and respect the players, so he will send them to complete some challenges. Ultimately, the Bamboo Raccoon Chief will agree with the alliance after revealing that he senses bad changes in Primal World's flow of life energy and plants have started to die. He believes Lord Tyrant is behind this, and is also the cause of the corrupted Raccoons. Unlike the Bamboo Raccoon Chief, the Tree Raccoon Chief will not require that the players prove themselves. Instead, he will give players various tasks to help them understand and investigate the flow of life energy.

The Raccoons are bipedal, have fluffy striped tails and bodies covered with fur. Their fur can be yellow, orange or purple but all Raccoons have a white or near white color fur in the area of their mouth and belly. They have a small size, but are capable fighters. Raccoon Fighters and Raiders wield clubs and possess whistles. Raccoon Warriors and Geomancers have a staff and a pumpkin used as a hat.