Reawakening is a feature introduced in the PWI New Horizons expansion. Once your character has reached level 100, you will receive a Reawakening quest from General Summer in Archosaur. Reawakening (often called "rebirth" or "RB" by players) brings your character back to level 1, but grants additional attribute points, access to the Primal World, access to Boundary quests and more. Players can Reawaken two times.

In order to reawaken, your character has to be level 100 and have completed their level 89 Spiritual Cultivation quest (Aware of the Myriad or Aware of the Void). Follow the Reawakening quest from General Summer in southwest Archosaur. The quest will give you the item "Stone of Love·Restoration" to reawaken for the first time.

To reawaken a second time, you will need the second reawakening stone "Stone of Love·Recreation". You can acquire this stone by completing the Reawakening I Quest Chain, with no Boundary level requirements. If you have already completed this quest chain prior to the Wings of Rebirth expansion, you can craft the stone instead which requires the Boundary level of Arcane Sky VI.

When reawakening, you will not lose your gear, skills, Cultivation or anything else. Quests will not reset, therefore any quests you have completed will not be available again. After reawakening you will receive a x4 EXP (first Reawakening) and x3.5 EXP (second Reawakening) multiplier for quests, EXP pills and monster kills. The Reawakening multiplier stacks with Hyper EXP Stones and x2 EXP events. The multiplier ends once your character is level 100 again.

Upon reawakening, your stats will reset but additional stats will be granted based on the level you were before. The levels of your past lives are commonly referred to as "historical levels". You can retroactively level your past lives through the Ancient Tome.

Attribute points given per historical level:

You can equip your gear as long as you meet the stat requirements, but a free set of starter gear will be given to you upon your first reawakening until you can equip your own. You will not receive a set of starter gear on your second reawakening. Ornaments and Rank gear with no stat requirements can be equipped from level 1. The gear's level requirements will be bypassed by your historical level. Venomancers can use their level 100 pets at level 60-65.

Here are some basic steps that will start you on your first Reawakening or Rebirth (RB).

At this point you will reawaken and become level 1, and you will be teleported to the city of your character's race, where you can begin taking quests for your particular race (Human, Untamed, Winged Elf, Tideborn, Earthguard, Nightshade). If you did these quests prior to the Wings of Rebirth expansion, you will not be able to do these again.

In addition to your first Reawakening comes your second. In order to advance to reawakening 2, some requirements must be met:

Once you have acquired the Stone of Love·Recreation, you can talk to the Master of Cycles located in South Archosaur (547 626) and select the Reawakening option to begin the second reawakening process. 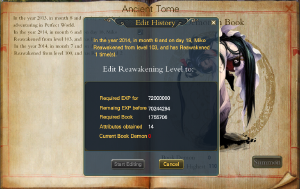 The Ancient Tome can be accessed from your character's stat window (press C in game) and it allows you to stash any EXP you gain into storage to retroactively level your past lives and receive your missing bonus attribute points.

Open your Ancient Tome. Awaken the Book Demon. When the Book holds enough EXP for your past life to advance a level, you click the brush stroke icon in the Ancient Tome next to the life record you wish to edit, and the Edit button will be available. After you've clicked Edit, the appropriate amount of EXP will be removed from the Book Demon's holding, and your past life will be leveled.