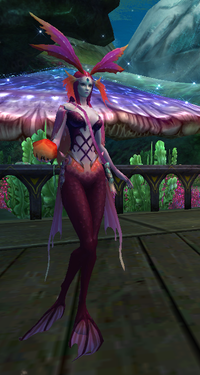 The Riptide are a peaceful aquatic race that live in Tideswell and the surrounding area in the Silent Sea in Primal World. They have been fighting against the Shoka for a long time. They play a major role in the quest lines for Shifting Sky and Twilight Sky by helping the Emperor Alexander and the players defeat the Shoka and Wraith Lord Caeya.

The Riptide have a humanoid appearance with fins and scales throughout different parts of their bodies. Their skin and scale colors can vary between blue and purple. Some Riptide have long fish tails while others have human-like legs with long fins instead of feet. Normal Riptide decorate themselves with modest accessories, while Riptide warriors wear armor.