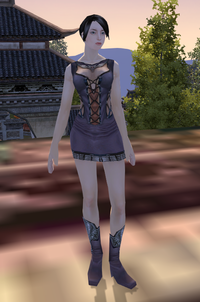 Roll Call was a daily quest available for characters level 31 and above. The quest would appear in the player's Quest Log automatically every day and could also be seen from the Unique Rewards window, which has since been replaced with the Growth Goal system. Players that still have the Roll Call quest will automatically receive their rewards for the final time when logging on after May 22nd, 2019. Attendance Sheets can still be exchanged through the PW School Teacher.

Completing the Roll Call quest will reward the player with the following:

Advice Boxes can also be used in low level Transmutation for 20 Alchemy Credits.

Attendance Sheets can also be used in low level Transmutation for 40 Alchemy Credits. They can be used to exchange for items at the PW School Teacher, located in central Archosaur (553, 652 ↑28).

Attendance Sheets can be used to exchange for Attendance Rings, which can be used from level 50. The rings can be upgraded a total of two times. They cannot be traded or Account Stashed. The player can choose to craft a physical attack or magic attack version of each ring. If the player chooses the wrong type of ring and it is an ☆☆Attendance Signet·Good or ☆☆Attendance Ring·Good, they can exchange it for the correct type at the PW School Teacher for a fee of 10,000 Silver Coins. While the Good Attendance rings cannot be refined, the other two versions, Exemplary and Perfect, can be refined.

Upgrading to a higher version of the Attendance ring requires 30 Attendance Sheets and the current Attendance ring that the player wishes to upgrade. This ring will be consumed to create the upgraded ring.