The Secret Passage, also known as SP, is a level 29+ open-world dungeon. It houses another dungeon inside it, the Hall of Deception. The Secret Passage is not instanced like other dungeons, allowing an unlimited amount of players to access the dungeon together without a squad required. Players are also able to fly inside of it.

Most monsters inside are above level 30 and are stronger than those outside of dungeons. Many of them will debuff players with poison damage-over-time (DoT) attacks.

The Secret Passage is a PK-enabled dungeon. 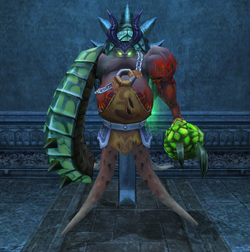 Dismal Shade is the second strongest boss in the Secret Passage. It is a level 45 boss with 168k health. It is located in a room near the beginning of the dungeon. Upon entering the dungeon, go north into the first room and turn left to find Dismal Shade. It is required for a level 36+ timed quest, "Seal the Dismal Shade". This quest has a 2-hour timer but can be repeated if the player fails or gives up.

There are four Skelevizen Warlocks in the same room which will attack players when they begin to fight Dismal Shade. These warlocks deal AoE damage, which can be difficult especially while fighting Dismal Shade itself as they can respawn.

Dismal Shade will attack players with a poison damage-over-time (DoT) effect, which will affect all players in range and can stack. It can deal a lot of damage to weaker players, but can also be purified. This attack can reach players flying in the air in the same room.

Shade Eido is a level 35 boss located in the south-easternmost room in the Secret Passage. It is required for the level 32-37 quest chain "Hero Spirit" to collect a Nameless Body.

While he does have his DoT attack, it's not as harmful and doesn't stack like Dismal Shade. Most players should be able to handle the boss alone if they are using level-friendly gear acquired from other quests.

For the most part, there are only Skelevizen-type enemies (who deal long-ranged magical damage and are aggressive) and some Tombseekers guarding the passage to Shade Eido. There is also a small room with two Skelevizen Warlords and a Guardian Tombstone. Most players tip-toe past them and take on Shade Eido.

In the room where Shade Eido is located, there are six Skelevizen Warlocks, four where the boss is standing and two by the doorway, and two Guardian Tombstones by the stairs near Shade Eido. Most of these enemies will need to be cleared out when fighting Shade Eido. 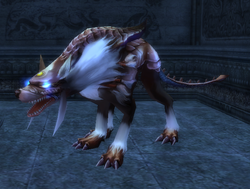 Silver Frost is the most difficult boss inside the Secret Passage. It is level 85 with over 5 million health and is aggressive. It is located in the same room as Dismal Shade, at the northern end of the dungeon. It is required for the quest "Melt the Frost", which is part of the Wraith's Ploy quest chain to unlock Old Heaven's Tear.

Silver Frost only deals physical damage to the player and does not AoE. It can be safely attacked without provoking Dismal Shade, but players will need to clear some Skelevizen Warlocks to get to it. It can also be lured out of the room.

Silver Frost does not drop any Silver Coins or items upon death.