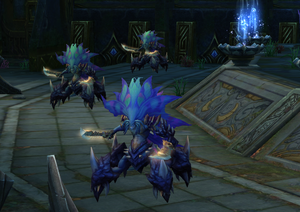 The Shoka are an aggressive aquatic race that live in the Silent Sea in Primal World. They enslave aquatic animals and usually fight on the backs of enormous aquatic aberrations. The Shoka have fought against the Riptide for a long time and will mercilessly attack anyone who dares to dive into the Silent Sea. The Shoka King is known to conspire with Caeya, the former leader of the Nightspikes who became a dangerous Wraith Lord after his defeat by the Tideborn.

The Shoka play a major role in the Primal World quest lines for Shifting Sky and Twilight Sky and are the primary antagonists players have to fight against after Tyrant Prince Mushi's defeat. The players have to form an alliance with the races and tribes of the Primal World to help Emperor Alexander and the Riptide fight against the Shoka and stop their dangerous schemes.

The events during the war with the Shoka will tear open a portal leading to the Uncharted Paradise, which was thought to have been lost in the great calamity that preceded the creation of Perfect World. The Shoka also appear in the Ten-Dimensional Domain and fight against players.

There are different types of Shoka, but they all have the common trait of skin colors that vary between blue and purple. Some may have shades of turquoise or magenta. Some Shoka have big fin-like manes, tentacles on the sides of their head and four legs with spikes. Others have big fin-like ears, sharp legs and long fish tails. Some Shoka have fins on their back, spikes, claws, two legs and a fish tail. Another common trait is a claw-like left hand found on many Shoka.