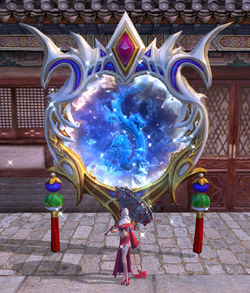 The Siamese Fruit is an item that allows players to change their character's gender from male to female or vice versa. Players can change gender by taking this item to the Magic Mirror in northeast Archosaur (575 686). The Siamese Fruit can be purchased from the Boutique for 15 gold, or 10 gold when it is on sale.

Before going through the gender change process, the player should confirm that they meet all of the conditions mentioned above. After obtaining a Siamese Fruit, the player can talk to the Magic Mirror in northeast Archosaur (575 686), located behind Cosmetic Master Illian. After selecting the "Gender Swap Service" option, a window will appear where the player can confirm they want to change gender. The player will have another chance to confirm again, so they can cancel the gender change process if they change their mind.

The player will then be taken to the customization interface where they will be able to customize their character under their new gender. Once the player has confirmed the appearance they would like to have, a window will appear notifying the player that they will be disconnected if the gender swap is successful. Once they confirm this popup, if the gender swap was successful, the player will be logged off and sent back to the character selection screen where they will see their character now as the opposite gender.

Once a character has swapped gender, their original gender-specific Fashion and Fashion Weapons will no longer be usable. Equipment is not affected by changing your gender, but you will see equipment icons differently from your original gender.