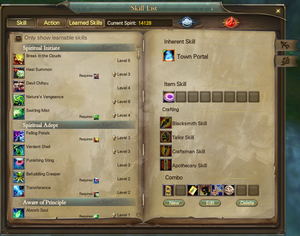 A skill is a special ability that characters can learn and use to perform stronger attacks against enemies, make themselves or others more powerful, or for manufacturing equipment. Skills are separated into two main categories: combat and non-combat skills. Both types of skills can be accessed by opening the Skills window using the R key or through the crossed swords icon under Cultivation in the Control Panel to the bottom-right corner of the screen. One non-combat skill, Runecrafting, can only be properly seen by clicking on the Learned Skills button at the top of the window. 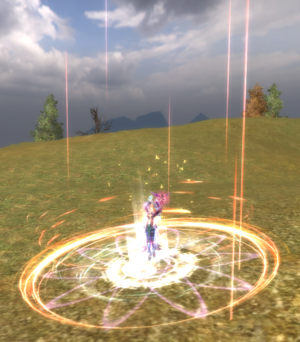 Combat skills are mostly specific for each class. They can be categorized as attacks, curses (or debuffs), blessings (or buffs or supportive skills), and passive skills. Skills for physical classes such as blademasters and barbarians have a low amount of channeling, causing the skills to be casted faster, however they are not always accurate against monsters. On the contrary, skills for magic classes such as clerics and wizards have a higher amount of channeling, meaning skills are casted slower, but have 100% accuracy against monsters.

Players can cycle through sage and demon skills through the same window, making it easier to compare skills from each cultivation. This can be done by clicking on the blue and red icons to the upper-right of the window, which will change the skills displayed directly in the window.

There are also some passive skills available for all classes, earned through progressing through the Primal World and earning Boundary levels.

You can learn your combat skills through the Skills window. You must meet the required level, cultivation, coin, and spirit values in order to learn or upgrade a skill. You must also not be in combat mode. Some skills may also require the use of Skill Books. To learn or upgrade a skill, find the skill you want to learn. Hovering over the level of a skill you have already learned will show a preview of the next level, if one is available, as well as the level requirement. If another level is available to you, you will see a small up arrow to the right of the skill. The arrow will be dim if you do not meet the requirements, which you can hover over to check what you are missing. If you meet all requirements, the arrow will be lit, and a confirmation window will appear upon clicking on it. If you do not learn or upgrade the skill successfully, you may need to be standing still on the ground or within a safe zone.

Previously, learning and upgrading skills required talking to a skill trainer NPC, however as of the Eclipse expansion they have since been removed.

Within the Skills window, you can also set up a macro for your skills. A macro, sometimes also referred to as a combo, allows the player to use multiple skills in a particular order by only clicking on the macro, rather than clicking on each skill to cast them. Macros can be added, edited, or deleted through the Skills window, found to the bottom-right of the window. Macros can be set to either only cycle through its skills once, or set to repeatedly cast them. They are essential when using the Auto-Cultivation system.

Players can also access their Glyph skills through the Skills window. There are two tabs on the right side of the window; the upper tab is for the main skills window, while the lower tab is for the glyph skills window. From here, players can embed Glyphs into their Sanctified skills or interact with Glyphs in their Glyph bag by upgrading them. Players can benefit from the Glyph System from level 1, though they will only be able to embed a Glyph into Town Teleport and unlock only 1 Glyph Slot.

Non-combat skills mainly consist of the five different manufacturing skills: Blacksmith, Tailor, Craftsman, Apothecary, and Runecrafting. The first four manufacturing skills can be seen from the main skills window, displaying their current level and their EXP. Runecrafting however can only be accessed by clicking on the Learned Skills button at the top of the window. It can be found in the Passive Skills section, and the EXP can be viewed by hovering over the Runecrafting icon.

There are other non-combat skills, which can be accessed through the Actions window, either through pressing the E key or clicking on the Action button on the Skills window. One such non-combat skill is meditation, which allows your character's Health and Mana regeneration rate to double while meditating.