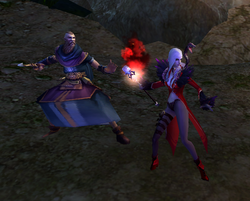 The Sky Owls play a minor role in the quest line for Arcane Sky. Emperor Alexander seeks their help to fight against Lord Tyrant, but the Sky Owls refuse and do not hesitate to attack the player. After failed negotiations, Alexander's army eventually steals their airships to use them for the army's transport.

The Sky Owls appear to be human, but it is unknown if they have hidden non-human traits or abilities. They wear typical human clothes, but female Sky Owls decorate themselves with feathers and real, living snakes.