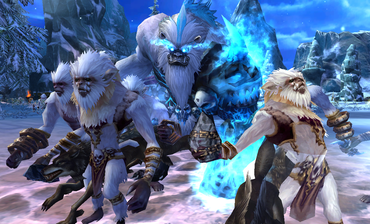 The Snow Apes are an aggressive race located in Snow Ape Ridge in the Primal World. They are known for mining a rare metal called frostsilver ore which Lord tyrant seeks to obtain in order to craft a copy of Emperor Alexander's sword, the Heavenly Realm's Rose.

They play a minor role in the quest line for Arcane Sky and Mirage Sky. Players will have to fight the Snow Apes in order to obtain the rare frostsilver ore to purify and reforge Emperor Alexander's sword. Snow Apes use their claws to fight or use small sharp dagger-like weapons, while other Snow Apes attack by throwing rocks. The Snow Ape Chieftain wields a big poleblade.

Snow Apes have a long white fur. They decorate themselves with skulls, golden armlets and small pieces of cloth.