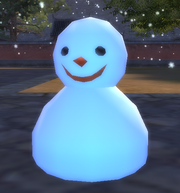 A Snowman is a festive type monster that usually appears during the month of December for Christmas. They appear in Etherblade City, City of the Plume, City of the Lost, and Archosaur. During their presence, snow will also fall in these cities. Snow also falls in City of the Raging Tides, Tellus City and Dawnglory, but they do not have snowmen.

Snowmen are stationary, are level 150, have only 1 health, and are immune to elemental attacks.

They are also the objective of a repeatable quest offered by the Snowman Tamer called Naughty Snowman.

Upon death, snowmen will usually drop a total of 3 items or more. These include most chi stones, dice tickets, and exclusive Christmas-themed fireworks.

Snowmen speak in normal chat when they are killed. There are a total of 50 different lines of dialogue that they can possibly say upon death. There is also a chance that snowmen will say nothing upon death.