Imagine volleys of arrows are raining from the sky, the thumping noise of catapults can be heard in the distance and the horn of brotherhood has sound, fighting fearlessly alongside with your guild brothers and sisters to defend the honor of your brotherhood.

Live the legend once more in this epic battle and let it be sung through the whole realm.

Territory War (as known as TW) is one interesting aspect of the game - Perfect World which provides a nice weekend get away from some boring grind and was fond by many. It consists of micro and macro combat in a coordinate fashion aim to achieve objectives in a preset timer. More information on territory was can be found at the links below:

This guide provides you with an overview of territory war, with some pointers and common strategies used.

This equipment is only available in the instance.

There are three types of guard towers.

It is important to note that during the 30 second building time of any guard tower, it has only 500,000 health points but has 500 defense levels.

Catapults are the main offensive weapons used in the Territory War and can be found near the portal in front of the revival point. This location also serves as their starting point. To drive a catapult, a catapult scroll is needed. It can be purchased from the Battlefield Advisor, which can be found left from spawn point in TW instance. For catapullers, it is important to know that the catapult will take priority in the closest NPC target, be it Crystal, Tower or mystic/venomancer pet. This is where positioning the catapult becomes crucial. It will not attack players.

Destroying the crystal is the main objective in Territory War. It can be mainly damaged by catapults. Players will only deal 1 damage to a crystal, and they cannot debuff it. If there are enemy towers standing, the enemy's HQ Crystal cannot be damaged at all until the towers have been destroyed. 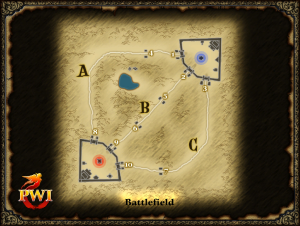 The Territory War map is a square battlefield with the offense and defense bases situated at diagonally opposite corners.

There are bind towers at 1, 5, 6 and 10 for each guild. Bind towers can no longer be destroyed. By taking quest from binding tower, when you respawn in base and enter the orange teleporter on the right, you will be teleported next to the binding spot previously chosen. One can only bind himself to one tower at a time and once teleportation is completed, previous bind dissapears also, which means you have to bind yourself every time. To bind yourself to a different tower while previous bind is still active, simply trash quest.

Both bases are connected by 3 roads at their gates: A, B, and C. There are towers situated along the A and C Roads, and 2 towers per guild along the B Road. Catapults can only travel inside the base and along these roads. When viewing the territory map, players will be able to see the positions of all guild member but not the positions of enemy players and catapults.

In the war room

Map of TW and strategy formulated: indicate path, point of defensive/offensive moves on map. This includes indication of the role of each team to provide synergy overview of on teams. Which team is responsible to secure enemy base wall when launching assault, etc.

Time to port = time to have fun.

This strategy is used when you are superior in level and equipment. Aim to eliminate the enemy in a quick and surprising move so they cannot regain footing.

Formation: First line BM/Barb (middle-lower: in preparation to pick up siege), second line caster including wizard, cleric, archer. BM in this formation serves as shield to wizard and archer. Coupled with speed pill, he employs stun tactic as often as he/she can.

Weakness: This formation fears attack from middle. If a strike team (2-3) can make a dent on the robe class (cleric), the formation will soon dissolve.

Countermeasure to this strategy: Block enemy advance at first bind point (B6 – defender is blue base) to prevent them from binding. Send 2-3 strike team flank to it middle position and take out the cleric and other robe class. Assist attack is the key to eliminate target rapidly.

Push from middle lane but switch to other gate once you've reached the front of the gate B. The switch is rapid and can be gate C or A. The rapid switch of direction distracts defending force, pulling them away from original defended position.

This is helpful when securing defended base wall becomes difficult.

Path: Middle lane to enemy gate B, than switch to gate C or gate A.

Formation: First line BM/Barb (middle-lower-in preparation to pick up siege), second line caster including wizard, cleric, archer. BM in this formation serves as shield to wizard and archer. Coupled with speed pill, he employs stun tactic as often as he can

Weakness: Because of the diversion, it stretches the formation, thus defense is weak against attack from the rear.

Countermeasure to this strategy: Block enemy advance at first bind point (B6 – defender is blue base) to prevent them from binding. Send 2-3 strike teams on flanks to rear position and take out the cleric and other robe class. Advance party break into the middle of enemy formation, this create double sandwich. Assist attack is the key to eliminate target rapidly.

Rapid forward from middle lane to enemy gate B and gradually withdraw to attract firing power from enemy. Aim to draw enemy out of the gate. This is useful when out numbered. To better deceive the enemy, send two sieges rapid forward from middle lane to suicide, port back and push up from side lane. By this time, 2 sieges that proceed from lane A or C should be on enemy guard tower.

Since the force was split, siege team at side lane must be well protected.

Weakness: Forces are split = weaker offensive and can easily counter by enemy suppressing the middle lane if they discover your intentions.

Binding point: none until siege in position on guard tower/crystal. Bind at nearest bind pillar.

Launch attack in wave with wizard and archer front line. Execute enemy front line and withdraw immediately (hit and run). This is to stretch enemy defense line and make an easier way into enemy base from side lane.

Countermeasure to this strategy: Commander should pay attention to attack pattern. If enemy practices this strategy more than 3-4 times. It's time to concentrate the attack following their withdrawal.

When facing stronger enemy, with full defense at base. Sending couple of strike teams to take out enemy who attempt to rejoin their formation can decrease their morale. Wait for an opportunity to launch assault.

Countermeasure to this strategy: Recall strike team and employ concentrated defense to repel the attack and launch assault from side lane.

There is no one size fit all strategy. Combination of strategy to be deploys is depend on the situation.

Rostering in Territory War is a big task undertake by the war general or adviser. How to group 80 peoples into groups to maximize their potential in that TW session is a commonly question ask by many. Below are some ideas:

Should have 2-4 barbarians, 2 clerics, 1-2 blademasters, 1 venomancer, 1-2 archer, preferably a mystic also. The role of this team is to destroy enemy guard towers and crystal while staying alive. Using their assist as cover, catapult team can move slowly but they do not stop or rush. Clerics in this team need to prioritize keeping themselves and the catapullers alive, as they are main targets. Mystic is extremely useful as backup support, having ress buff on clerics at all times, giving shields to main targets and healing.

Should have 1-2 blademaster, 1 cleric, 1 venomancer, 2 archers, other DD's. This is the main body station at first and second line of attack and defend. They provide assistance to all teams, especially to catapult team, always going in front, clearing the way. Bm's should stun and dg in the first line, with the venomancer purging, while archers need to prioritize enemy clerics.

Should have Blademasters, Wizards, Archers, Psychics, Venomancers and Seekers. 1 cleric should be enough for this type of squad. Venomancers need to purge and amp enemy catapullers and other priority targets, while keeping everybody brambled, while seekers can pull enemy catapullers away from towers with their Morai Transposition skill or even into guard towers,to kill them instantly.Seekers should also debuff target's defenses. Blademasters need to stun and DG targets, trying to time it with Venomancers and other DD's to maximize damage output. Physical DD's should focus AA classes, with clerics being first priority, while magic DD's need to take down HA and LA targets, especially catapulling barbs. Your entire purpose is to stop the enemy from advancing into base.