A thousand years ago, the once-powerful Twilight Empire fell in the wake of destruction of an ancient demon released from imprisonment. The tragedy left only one survivor of the royal bloodline: The Moonlight Princess, who has recently returned from exile to oversee the ruins of the Twilight Temple. She now seeks out powerful warriors to aid her in fighting a new evil that threatens the last remnants of an era she once called home.

The map for Twilight Temple Revisited is separated into 3 parts, though only 2 of these parts are currently accessible. The second part of the map is located east of Illusion Lord Armageddon's room.

The map for Twilight Temple Revisited Part 2 is separated into 2 parts. The second part of the map is located to the east of the first map. 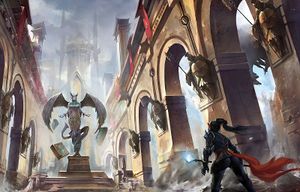 Players can enter the dungeon without the use of an item, however will need a Moon Ode Order to start the dungeon or teleport into the main part of the dungeon. A Moon Ode Order can be picked up once per day from the Streams Order Envoy inside the dungeon, or through the Faction Base if the Ticket Vendor Faction Talent has been activated. The order will last 24 hours from the time you pick it up.

The following classes are ideal for Twilight Temple Revisited, though not all are essential: