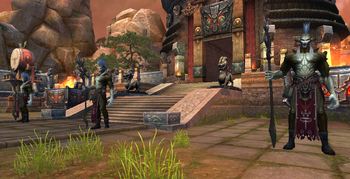 The Tyrant Army is the army that belongs to Lord Tyrant and his son, Tyrant Prince Mushi. They live in Lord Tyrant's Fortress and the numerous Tyrant Army camps throughout Primal World.

The Tyrant Army appears to be primarily composed of a seemingly all-male race. There are female Tyrant Army members like Lord Tyrant's advisor, Tyrant Warlock Rani Dreamflow, the Tyrant Army Pyromancers and the Priests, but they all appear to belong to different races. Tyrant Army members can use all types of combat including melee, ranged attacks and magic. Some of them may fight while riding animals.

They play a major role in the quest lines for Arcane Sky and Mirage Sky. They are the primary antagonists players have to fight against in order to reach Lord Tyrant to defeat him and save Primal World from his evil schemes.

The primary members of the Tyrant Army are very tall and intimidating. They appear to have a brown and gray skin color with red eyes, long elf-like ears and white or black hair. They wear very little clothing, only covering the bottom parts, and sport their hair in a mohawk.