Unlike most maps, Undercurrent Hall's map does not accurately show where the players are located but instead is more of a diagram of the 3 areas in the dungeon.

Open the Fire Path by talking to the NPC inside Undercurrent Hall and walk into the orange portal.

Once inside, get on your flyer and kill the monsters around Inferno Lord Phyrex to stop to stop his regeneration. After this, the squad needs to kill Inferno Lord Phyrex. Sometimes the boss will put squad members in cages. To free them, simply attack the cage.

Once Inferno Lord Phyrex is dead, monsters will spawn in the air and start dropping meteorites to kill NPCs. Your squad's job is to protect the NPCs by killing the monsters. You can also hit the Essence that spawns close to the NPC. Hitting the Essence when a meteorite is close to the ground will make it dissipate and the NPC will take no damage. If the squad fails this stage, they can restart it at the entrance NPC. Once the NPCs have been saved, monsters will appear on the other side. The squad must not let the monsters pass.

After all stages of the Fire path have been completed, the real Inferno Lord Phyrex will spawn. Have a player attack the boss while four other players jump on the altar lights on the right. Activating the right altar will cause Inferno Lord Phyrex to receive a debuff that allows the squad to deal more damage. The left altar can be activated in a similar manner to receive a squad attack boost.

The boss sometimes buffs himself so it's recommended to have someone with purging abilities in squad, such as a Venomancer. The boss will also freeze selective members and unleash a strong laser attack that will kill anyone standing in its light. 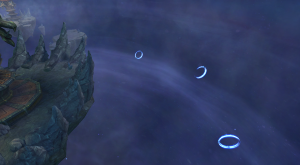 Floating rings in the Wind Path.

Once you're in the Wind path, hop on your flyer. Here you will have to assign one or two players to fly through the rings that will occasionally spawn. Flying through the rings will gather the energy required to activate the traps. Each trap activation requires 10 points of energy. You can see the current amount of energy in your quest log.

Once enough Dragons have been captured, you may enter one of the mirrors to go inside one of the two Dragon rooms. The two bosses have to be killed at the same time otherwise they will activate a buff that will prevent their death. Some strong squads can kill the bosses before they buff.

[Primordial Blood] each. Undercurrent Coins can be exchanged at the Undercurrent Guardian inside the dungeon for a variety of rewards: